In the Los Angeles Lakers' annual campaign to pacify the Western Conference, no pocket of insurgency has been more troublesome than Portland. It's our own little Afghanistan: distant, annoying and hard to subjugate. As you'll hear a dozen times today, the Lakers haven't won there since 2005. (On its face that date seems strange, since the Lakers sucked in 2005, but the Trail Blazers sucked back then too.) Eight consecutive losses in the Rose Garden, in other words.

Tonight's a pretty decent opportunity to break the skid. The Lakers will still be without Pau Gasol, but the Blazer roster has been ripped stem to stern by injuries. A list of who the Lakers won't have to deal with includes Greg Oden, Rudy Fernandez, Nicolas Batum, Joel Przybilla, Travis Outlaw and Steve Blake. That's half the rotation Portland expected to have this year, including their top two centers.

Andrew Bynum, this is your time to shine.

Portland has been admirably resilient in the face of misfortune so far. They're 22-15 and in the thick of the playoff scrum. At home they've been their typically formidable selves, winning 13 and losing only six. For the most part at the Rose Garden they've beaten the teams they should beat and avoided bad losses, though they've dropped a couple home contests to Memphis. One suspects the Blazer faithful will be more vocally hostile with the Lakers in town than they are when facing the Grizz.

Credit for the Blazers' solid play this year goes first to Brandon Roy, in the midst of another All-Star season. He's regressed a touch from last year thanks mostly to a heightened turnover rate, but he's still pretty clearly the third-best shooting guard in the game. Roy is the type of player Ron Artest was signed to stop. Ron needs to keep him out of the lane, as Roy's penetration is often the key to the Blazer offense.

LaMarcus Aldridge is Portland's number-two option. I've never been horribly impressed with the guy. He's decent at most things but he isn't an All-Star, and a guy his size should be a much better rebounder than he is. Lamar Odom should be able to control him. Do not disappoint me, Lamar! I hate looking stupid in front of the cool kids. 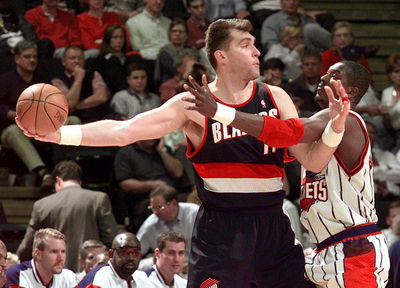 You know what might be a bad sign? When your coach and your starting point guard get into a 30-minute shouting match after practice. Oh hey, guess what happened in Portland yesterday. I'm not sure what Nate McMillan and Andre Miller were bitching at each other about. I started reading up on it and got really bored. Our brethren at Blazersedge have lots about it, so feel free to head on over and do some learnin'.

What I am sure about is that Miller has become a terrible shooter. In this, his first year in Portland, he's making only 45% of his two-point attempts and 20% of his threes. Luckily for us, he's also not some superathletic guy who'll undress Derek Fisher like Baron Davis did on Wednesday night. The other two Portland starters will be Martell Webster, a defense-and-three-point specialist, and Juwon Howard, a specialist in being old.

To give credit where merited, the Blazers do have a really solid young bench. In Jerryd Bayless, Dante Cunningham and Jeff Pendergraph, they have three young and athletic pieces that have been quite productive this year. This is the one area where Portland has a clear advantage over the Lakers. Bayless in particular is a danger: he has the game to destroy Fish in a way that Miller can't. 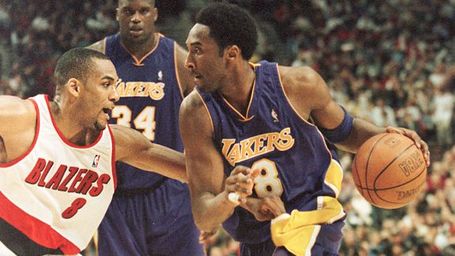 The Laker offense, even shorn of Gasol, should have a fairly easy time of it tonight. (I italicize should only because let's face it, we never know which Laker offense is going to show up.) The Blazers are middle of the pack in defensive efficiency, and that ranking benefits from the second-best "free throw defense" in the league. It also includes 21 games of Oden and 30 of Przybilla. Without those two guys, the only Blazer who goes above 6'9" is Aldridge, hardly anyone's idea of an inside enforcer. Over Portland's past five games, a number of opposing bigs have put up big numbers. Bynum needs to demolish this undersized front line.

I know the Rose Garden is supposed to be haunted or whatever when the Lakers visit, but this feels like a game our boys should absolutely win. The Blazers have not played impressively of late, they're wrestling with locker-room discord, and because of injuries they've had to reach way down into their depth chart. The Lakers really couldn't ask for better circumstances.

So I'm calling it: the streak ends tonight. If it doesn't, we all have a right to be mucho irked.

All statistical terms defined here. Parentheses indicate league rankings. Numbers are courtesy of Basketball Reference and HoopData and, except for record and net points per game, are through Wednesday night's action.