The Dallas Mavericks visit Staples this evening, and I should really feel better about this game than I do. The Mavs are on stage two of a back-to-back, having played (and won) in Sacramento last night. They should be road-weary, as they're finishing up an eight-day trip that's included stops in Denver and Houston. Their once-feared offense no longer sets the league on fire: over the past five games, it's barely managed over a point per possession.

So why am I all angsty about this one?

To begin with, Dallas is unphased by playing away from home. Its road record of 12-5 is second best in the league and includes a 94 to 80 pistol-whipping of the Lakers back on October 30th. Remember that? How could we forget. The Lakers turned the ball over on over a fifth of their possessions, shot less than 40% from the field and trailed by 22 in the third quarter. Fun memories.

As it turns out, the Mavs' shutdown D back then foreshadowed the season to come. Dallas is no longer the points-scoring dynamo we remember from 2006, but they've compensated for their atrophied offense with a surprisingly spirited D. After finishing 16th in the NBA in defensive efficiency last year, they're now fifth, just a couple ticks below the Lakers. On December 27th the Mavs held the terrific Denver offense to 0.96 points per possession, in Denver. 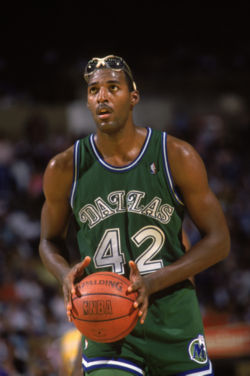 The Lakemen tonight should look to play classic inside-out basketball. The Mavs have a superior defensive center in Erick Dampier, and while he's on the court his Lakers' counterpart, either Andrew Bynum or Pau Gasol, will be in for a battle. Dirk Nowitzki, though, is nothing special at that end of the floor. The Lakers need to go at him, both in the hope of tagging him with fouls and because that's where one offensive advantage will lie.

If the Lakers can force the Mavs to sag their defense, three-point looks will be available. The Dallas D, for all its strengths, doesn't shut down the arc terribly well. Not that three-point shooting is a particular Laker virtue, but they'll need to hit those tonight. The Laker offense falters when it breaks down into a series of long two-point attempts, as it did in Phoenix last week. Patient Triangle execution in the service of good, efficient shot attempts will be critical.

The Mavericks' offense, for its part, is pedestrian. In three of their last five games, including the last two, they've failed to score more than a point per possession, as a number of key players are struggling with their shot. Shawn Marion is no longer an outside threat: whereas two seasons ago he made 66 threes, this season he's made zero. Jason Terry's shooting numbers are way down. Josh Howard, who didn't play against the Lakers in October, is back from his ankle injury but hasn't found his form yet.

Of course, there's still Dirk to deal with. The German Menace isn't going to win any more MVP awards, but damn if is he isn't a steady producer. Remember how Amare Stoudemire parked himself at the free-throw line and hit jumper after jumper when the Laker bigs failed to get out on him? Dirk can do the same thing all the way out to three. Lamar Odom, who's always given him trouble, defended Dirk extremely well in the first meeting and will need to slow the man's roll again. 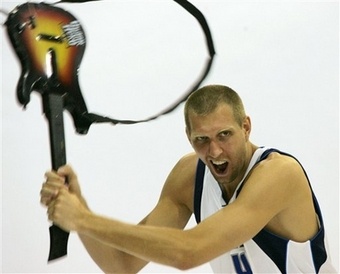 I'm not going to sit here and try to convince you the Mavs are a real threat to win the West this year. They're not. But the Lakers haven't been blowing anyone's doors off lately. Tonight would be a good time to sharpen things up while putting a little more distance between themselves and the Western Conference field.

All statistical terms defined here. Parentheses indicate league rankings. Numbers are courtesy of Basketball Reference and HoopData and, except for record and net points per game, are through Friday night's action.