Kirk Hinrich Is Hurting My Brain

Share All sharing options for: Kirk Hinrich Is Hurting My Brain

I've been having trouble developing an opinion about the Kirk Hinrich rumors. Not about their credibility, concerning which I've not the slightest clue. More about whether the suggested trades make sense for the Lakers. The uncertainty, I've decided, arises from not knowing how adding Hinrich would actually affect the Lakers' guard rotation.

Everyone seems to agree that the Lakers "need to upgrade their point guard position." But upgrades have been available for a while now. They're sitting right there on the bench. Both Jordan Farmar and Shannon Brown are more productive players than Derek Fisher. You could improve the team tomorrow by knocking Fish down to backup minutes and giving more playing time to the other two. But it hasn't happened.

Are we really so sure it would happen just by having Kirk Hinrich around?

What's beyond doubt at this point is that the Lakers have a massive institutional commitment to Derek Fisher. He's held his starting job despite long stretches of terrible play. The guy was awful in the playoffs last year. So bad that we at SS&R were begging Phil Jackson to sit him down. Fish came through with some moments to remember, of course, but our point was valid. More often than not, he was hurting the team on the court.

He hasn't really been any better this year. The Lakers' stars are so good that they can usually get by in spite of Fish's shortcomings, but let's be honest. He doesn't do much except break up the rare 3-on-1 fast break and shoot, and he's not really much good at the latter anymore. Nobody thinks Fish is an even half-decent solution at the point.

Nobody, except maybe Phil. I'm just guessing here, but what Phil values in Fish is what he doesn't do. Fish doesn't bust the offense with jacked-up threes early in the shot clock or wild drives to the rim. He doesn't piss off Kobe by forgetting his place in the D. Fish is predictable. Fish is ballast.

In any event, Phil's the one who keeps running Fish out there for 27 minutes a night. And if acquiring Hinrich doesn't change that playing time allocation, the deal will be of only marginal benefit. Hinrich's a big upgrade over Fisher but only a mid-sized one over Farmar and Brown. If you're just acquiring him to take bench minutes from the young guns while leaving Fish ensconced in his tenured starting job, I don't see how you've improved your championship odds that much.

I find myself thinking back to the 2003 offseason, when the Lakers signed Gary Payton. Fish started all 82 games in the 2002-03 campaign, but when Payton joined the team there was no doubt who'd be the starter. Fish had to move to the bench because this was Gary freaking Payton. (Turns out the Glove was pretty washed up, but we didn't realize that at the time.)

This, I suspect, would roughly be the effect of a trade for Devin Harris. Fish would remain the starter, but purely in a ceremonial sense. Harris has enough star wattage that Phil would have to give him starter's minutes. You don't acquire a guy like Devin Harris and keep him on the pine 60% of the game.

Would Hinrich have the same ability to disrupt Phil's inertial devotion to Fisher? I'm not so sure. Next year, maybe. The year after that, certainly. Fish has to get his Viking funeral at some point, right?

But in the home stretch of a title-defense season? A change that radical would be very un-Phil-like. Again I can only guess what's going on in Phil's head, but I fear that a deal of Adam Morrison and Sasha Vujacic for Hinrich would simply mean even fewer minutes for Brown and Farmar. That would improve the Lakers, sure, but just slightly and at what price? 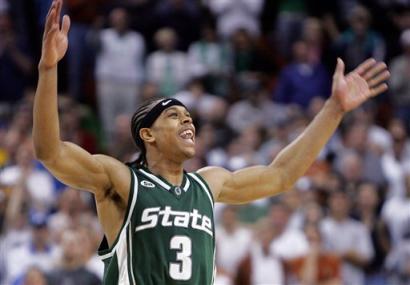 Every trade the Lakers make has an opportunity cost. Putting it another way: we only get to trade Adam Morrison once. He's the linchpin to any midseason Laker deal. If he goes to Chicago, you can forget about Chris Bosh (at least until the summer). Maybe Bosh isn't available to Lakers this season anyway, but he's definitely not if a Hinrich trade goes through.

I'm not driving at a hard, "trade for Hinrich / don't trade for him" conclusion here. I'm just unpacking some of the considerations. Shedding light on the various moving parts in this machine.

Fish is pretty bad, and Hinrich's pretty good. That much we know. Would that we also knew why Phil's so devoted to Fish, and how far that devotion will stretch.