Share All sharing options for: Happy Fruit and Flower Anniversary - 4 Years since Kobe's 81

Four years ago today, the Los Angeles Lakers met in a regular season matchup against the Toronto Raptors. The Lakers came in sporting a 21-19 record, while the Raptors were a woeful (but not 2009-10 New Jersey Nets woeful) 13-27.

Back in 2006 he was number 8, with no broken fingers and no title without Shaq. He brought with him guys like Kwame Brown, Smush Parker, and Chris Mihm - his "butter knives" into nightly gunfights.

Earlier in the season, Kobe had outscored the Dallas Mavericks through 3 quarters with 62 points, sitting out the entire fourth quarter, foreshadowing what was to come just one month later.

What started out as an ordinary Sunday game turned into one for the history books over the next 2 hours and 22 minutes. 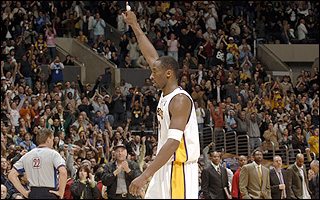 Kobe Bryant exploded for a outpouring of buckets that has not been seen since then, and may never be matched again, culminating in the following line:

Take a look to watch all 81 points again:

For a more in depth look, watch here and here

Instead of waxing poetic about how stunning and beautiful this exhibition of scoring was (and it was), I would like to take this moment to talk about the fallout from this game, and what it means four years later.

There were quite a few who appreciated this accomplishment for what it was: a masterwork in scoring.

Others sought to trivialize the occasion. Many reasons to diminish the excellence of Bryant's game were put forth, including, "It was the Raptors", "New rules make it easier", etc.

Now that four years have passed, it's safe to say to almost all of those little reasons have withered - Who else scored 81 versus the Raptors that season? Who has scored close to 81 points since then?

When Michael Jordan scored his career high 69 points in 1990, Karl Malone scored 61 that same year. In fact Tom Chambers scored 60 that season, too.

And what of those that say that others players could score it, they just don't want to? C'mon. It rings hollow. If a player could score that many points under the umbrella of winning, as Kobe did, they would. And someone still might. You don't know the dread I lived under that season, praying that no one would reach even 70 points, so as to cheapen Kobe's milestone. But it's been four years now, and the closest anyone has come is Kobe himself with 65 against Portland, and that took overtime.

It was just an amazing night by an amazing player, and so I'll go out and buy a basket of flowers and fruit to commemorate the game.