As your sisters and moms know, I live in Hollywood. There's a ton of reasons you'd never want to live here, but high atop the list is awards season in the film industry, which is happening right now. It's the worst time of year in my neighborhood.

Imagine a business that employs the dumbest, evilest people on the planet and whose output is 97% crap. That's the movie industry. Instead of tossing themselves off a bridge in shame, they take two months every winter to throw huge parties and congratulate themselves on the 3% of films that don't epically suck. The traffic jams, the cameramen, the studio honks clogging the bars... for two months every year, the 323 area code is a worse place than North Korea.

My contempt for awards season is dwarfed by one thing only: my love for an easy column topic. So with the Lakers' regular season exactly 50% over and a Super Bowl-like waiting period before the Cavs game, I'm holding my nose and doling out some Lakerrific midseason awards. No actual trophies, but at least you won't have to sit through a James Cameron speech. The envelopes, please!

Most Valuable Laker of the First Half: Kobe Bryant. Might as well start with an easy one. The Kobester averages 38 minutes a night, hasn't missed a game and remains a superelite playmaking force. His recent shooting woes, triggered by an astonishing array of injuries, have knocked him off his league MVP pace, but no other Laker's production approaches his overall value to the team. Three of the Lakers' 32 wins directly resulted from his buzzer-beating heroics. There's a case to be made that Pau Gasol is about as valuable on a per-minute basis, but he and his hamstrings have missed almost half the season.

Least Valuable Laker of the First Half: Josh Powell. Do you realize this kid averages an FGA about once every two and a half minutes? It's almost identical to Pau's rate of shot attempts. If there were a "shots jacked up per touch" stat, Powell would unquestionably lead the team. Everyone likes to mention that he's made 6 of 14 threes this year. Nobody mentions that he's made 36% of his twos. That is unfathomably bad. He also doesn't rebound nearly as well as you might think.

(Adam Morrison would usually be the odds-on favorite in this category, but he gets a pass because he's a useful trade chip. That his contract pays him over five milly means he could be a key to a trade deadline-upgrade. Perverse, I know.)

Commercial You Have the Least Hope of Avoiding: You need to ask?

There's dancing at The Vine!

Defensive Player of the First Half: Ron Artest.  Much hype over Ron-Ron's D preceded him to L.A., but the man has lived up to it. The stats and the visual evidence agree on this. His biggest moments, for good or ill, will come in the playoffs, but that's true for most of the team. 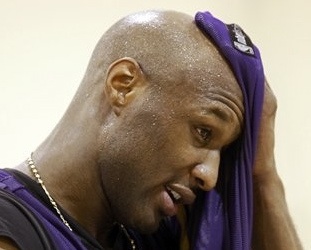 Most Improved Player: Jordan Farmar. It's so lovely to see Jordan resemble his old self again. His shooting has really improved, his turnovers are at a career low, and he's earning Phil's crunch-time trust as a result. Here's a question I can't quite answer: does Farmar's solid play make him more likely to be dealt in a midseason trade, or less? On the one hand, he's looking more and more like a critical piece for the Lakers. Mitch Kupchak might, on the other hand, be thinking this is a time to sell high.

Most Unimproved: Sasha Vujacic. Lately Sasha hasn't been a total catastrophe, as he was for a goodly first chunk of the season, but he's still not useful enough to see double-digit minutes. Sasha's now firmly in his second straight year of steep decline. If the Farmar/Shannon Brown collabo gets broken up in a deadline deal, Sasha will be called on to play a little more. That's the only way I seem him getting meaningful run.

Runniest Nose: Frank Hamblen. Don't ask how I know this.

Awesomest Win: January 3rd Over Dallas, 131-96. Other candidates considered include the "Six Point Fourth Quarter" game against Utah and the road win over the Mavs last week. The latter might turn out to be more important in the grand scheme of the season. The home blowout of Dallas, though, was the most comprehensively dominant. Revisit the highlights if you don't believe me. 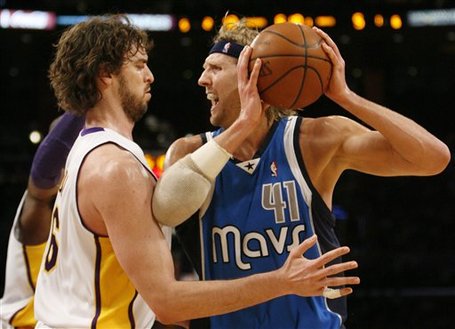 Ball-Kickingest Loss: Christmas Day Against Cleveland, 87-102. Yechh. This suckfest was the lowpoint of Laker fan morale. If the Lake Show wins on Thursday night, we write off Christmas and skip merrily along to home-court advantage. If we lose, we try to convince ourselves the regular season doesn't matter. I'm getting myself ready for either option.

Sexiest Laker Blog of the First Half: Silver Screen and Roll. This looks really self-serving, I know, but let me assure you the results were not rigged. The vote was observed by U.N. election monitors and the tally audited by the independent accounting firm of Arthur Andersen. Who are you to argue with democracy? We humbly accept this honor.