Grading Every Laker Through 32 Games

Share All sharing options for: Grading Every Laker Through 32 Games

Last night's squeaker against the Sacramento Kings reenacted in miniature several features of the Lakers' season so far. There was frustration and angst. There were mucky stretches of underperformance. There was genius and banality. There was Kobe Bryant rescuing his teammates and sending Lakerdom into a celebratory glee.

All good fun, to be sure.

The Lakers' title defense, as the game reminded us, has been both awesome and maddening. To make sense of it all, Professor Fishmore (Associate, nontenured) is issuing some not-quite-midterm grades. My system is elegant and traditional. Each player, along with a single select non-player, gets a letter grade based on contributions to the season so far. There are no A's for effort: DJ Mbenga is held to the same objective standard as Pau Gasol. I don't, however, downgrade for injury, with one exception noted below. You can probably guess what it is.

Kobe Bryant - The franchise godhead has laid waste to the notion that he's in even the merest decline. Not only is he having one of the best seasons of his iconic career, but he's doing it despite multiple injuries. His shooting efficiency is at a career high, and advanced metrics indicate he's as good defensively as he's ever been. A fully weaponized athlete. Grade: A.

Lamar Odom - Remember when his wife was thought a possible distraction? Unless you hold Khloe liable for her husband's weirdly off-target shooting, it seems safe to say that was all overplayed a bit. Lamar hasn't produced so far as Laker fans would hope, thanks to a shooting slump that's run virtually the entire season. When and if that gets straightened out, it'll be all good with LO, as he remains a very useful asset on D and the boards. He should probably stop trying so many threes. Grade: B.

Ron Artest - Up until Christmas Day, his tenure with the Lakers could not have gone any more swimmingly. Ron has fit into the Triangle offense like he's played it his entire career, and on D he's managed to fulfill the high expectations that preceded him. His plus-minus numbers are astounding: per 100 possessions the Lakers have been 29 points better with him on the court. All this makes his domestic clumsiness the more exasperating. For that eye-rolling folly I'm dropping him a notch or two. Grade: B+.

Andrew Bynum - I'm familiar with all the complaints about this kid. I read them every night in our game threads. And I'll allow that he has work to do both on defense and in rebounding. Still, don't let his shortcomings blind you to his virtues, which are considerable. He's an exceptionally polished post scorer whom about 28 other teams would gladly start, and he absorbs a lot of pounding that would otherwise fall to the slighter Gasol. And still only 22, people. Grade: B+. 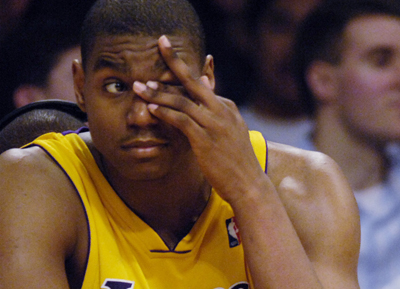 Derek Fisher - For the time being, Laker fans can stop calling for Fish to be benched. If it hasn't happened by now, it's not happening this year. Not that it would be undeserved: Fish's shooting numbers have fallen off a cliff, while his turnovers have... um, climbed up that same cliff. When he's hitting 40% of his threes, you can kind of live with his shortcomings. When he's hitting only 34%, as he is this season... well. Game Four was fun, right? Grade: C-.

Pau Gasol - Pau's doing what he always do. He gives the Lakers a high-efficiency scorer and volume defensive rebounder. He's a second load-bearing pillar for the whole edifice. There are nits to pick. He's just an OK offensive rebounder, not great, and I wish he'd be more ruthless in attacking overmatched defenders. (Last night, when he kicked out to Shannon Brown despite a one-on-one matchup with Spencer Hawes, was an example of how he should look to score more.) But he's a no-question All Star and a franchise legend in the making. Grade: A-.

Shannon Brown - Everyone loves Shannon, but it's hard to find satisfying his performance in this, his first full year of Lakerhood. Other than dunking, there's no one skill he possesses at an elite level. He's just OK across the board. Maybe his grenade-flash ‘09 postseason occasioned expectations that were never truly reasonable. Maybe he'll still meet them someday. Maybe this entire Lakers bench will drive us to lunacy. Grade: C.

Jordan Farmar - At this point, I think we know what we're getting from Jordan. Passable backup point guard play, the occasional double-digit scoring night and the occasional oh-fer. We won't make our lives or his any better by waiting for him to become Dennis Johnson. As a restricted free agent this offseason, his time as a Laker could end soon. As one of the only Laker players whom other teams might want and whom the team might consider trading, it could end even sooner. Grade: C. 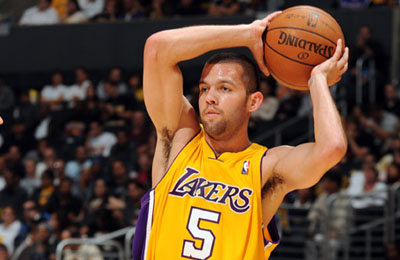 Josh Powell - The worst thing to happen to Josh this year were the four three-point shots he made over the Lakers' first eight games. That fluky burst of marksmanship confused his understanding of his own limited skill set and convinced him that he's Robert Horry. He's not. He's barely Robert Traylor. Also prone to random acts of boneheadedness. Grade: D+.

Sasha Vujacic - You might be surprised to hear that Sasha's made over 40% of his threes this year. You won't be surprised to hear he's been extravagantly bad in every other respect. I suspect Phil will give him plenty of run in coming games, as the team's desperate for outside shooting. Don't anticipate, though, that he'll produce anything to justify his $5 milly price tag. Grade: D.

DJ Mbenga - The best third-string center in the league, boys and girls! For a dude making less than $1 million, DJ sure has his uses. Obviously overexposed in a starting role, he can get plugged in on spot duty (as during the brief window when both Drew and Pau were injured) without total bedlam. In case of emergency, there are worse glasses you could break. Grade: C-.

Adam Morrison - Such as this one. Pardon my bluntness, but Morrison isn't an NBA player. That's OK. It's not like we expected him to contend for Sixth Man of the Year or anything. Nonetheless it amazes how someone four years removed the high draft lottery has proved to have zero use on the court. He's either a trade chip or year-end salary runoff. Grade: F. 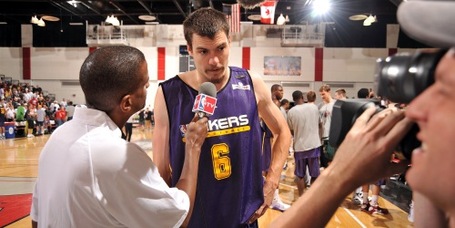 Luke Walton - Admit it... we never thought we'd miss Luke this much! At some point he'll try to return from his back injury, and we can only hope he contributes at or near what he gave us in November. The bench needs the help. So, so badly. Grade: C.

Finally, I would be remiss if I didn't mention...

Stu Lantz - For not being Hot Rod Hundley. Grade: A Motherfucking Superplus +++.