Share All sharing options for: The Magic Return, Sadly Without Rafer Alston

The Orlando Magic are something of a good-luck charm for the Los Angeles Lakers. When the two franchises interact, fate smiles on the Purple and Gold. The Lakers took Shaquille O'Neal off the Magic's hands. They acquired Trevor Ariza for the wretched duo of Brian Cook and Maurice Evans. And last June, as if I need to remind you, Orlando helpfully volunteered for the role of NBA Finals Punching Bag.

Tonight, the Magic are back. In the offseason they revamped their roster, bidding adieu to Hedo Turkoglu, Courtney Lee and horrendous point guard Rafer Alston. In their and others' places are Vince Carter, Ryan Anderson, Matt Barnes, Jason Williams (the non-murdering one) and Brandon Bass. The idea was to pile up enough talent to snag the franchise's first NBA banner, and it still might work out, but the team's looking pretty lost these days. Their record of 26-14 is nice, but it's good for "only" fourth in the East. More alarmingly, they've six of their last eight games, falling to such NBA luminaries as Chicago, Indiana and Washington. They arrive at Staples tonight smarting from consecutive road beatdowns in Denver and Portland.

In league circles there's emerging a theory that this is all VC's fault. In fairness, blaming VC is always fun. And it's true that he's having the worst healthy season of his career thanks to some ghastly shooting numbers. Overall, though, his production is better than what Orlando got from the hugely overrated Turkoglu, and the Magic's offense is basically the same as it was last season. They still take and make a ton of threes, and they get to the line more than almost any team in the league. They don't rank as an elite offense because they still miss way too many free throws - OHAI, Dwight Howard - and they collect few offensive rebounds.

No, Orlando's slippage this year has come on defense. Last season they were the NBA's best in points allowed per possession. This year they're sixth. The Magic don't force as many turnovers as they once did, and their iron grip on the three-point line has loosened. Compared to last season, Orlando opponents are taking more threes and making a higher percentage of them. A little of this you can hang on Carter. They also miss having Lee on the perimeter, as Williams is a pretty terrible defender.

The real fun tonight will be in the paint, where Howard will do battle with Andrew Bynum and Pau Gasol. Drew didn't play much in the Finals last year. The task of defending Howard fell mostly to Pau, who acquitted himself well. Dwight struggled with Pau's superior quickness and never dominated offensively. Tonight he'll see a rotation of defenders that will also include Congo Cash himself, DJ Mbenga. 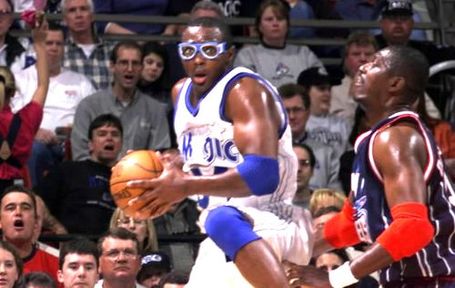 The Magic's backcourt is more formidable than the one they trotted out last June. Alston was comically bad, Jameer Nelson played not much and poorly as he'd just returned from injury, and Anthony Johnson somehow saw the court in non-garbage time. Yuck. It might have been the worst PG rotation ever seen in the NBA Finals. Nelson isn't back to his All-Star form, but at least he's healthy, and Williams has come back from the dead to be a credible backup. Jameer tortured the Lakers in the 2008-09 regular season. He doesn't look capable of doing so now.

It will be interesting to see what damage Orlando can do from long range tonight. They've got plenty of guys who can bomb away - including forwards Rashard Lewis and Ryan Anderson - so Laker bigs will have to close out forcefully. J.J. Redick, little used last year, now plays 20 minutes a night and hits 40% of his threes.

On offense the Lakers will have plenty of good options. Kobe Bryant will be defended primarily by Mickael Pietrus, who's Orlando's only reasonable shot at caging the Mamba. Lee was their other defensive stopper, and now he's off hating life in New Jersey. When Pietrus gets subbed out in favor of more offense, Kobe should light it up. 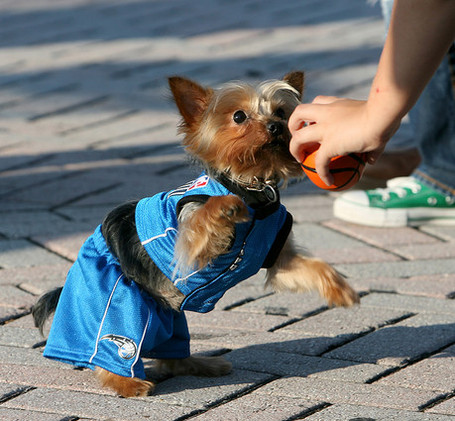 It's also not clear how the Magic will defend the Lakers' various big men. Howard's awesome, of course, and he'll take whoever's playing center. But who guards Pau when he's on the floor with Bynum? Neither Lewis nor Barnes can handle him. Stan Van Gundy might reach deep into his bench for help from Brandon Bass or Marcin Gortat.

This game is taking place at the wrong time for Orlando. They're stumbling in the wilderness at the moment, trying to figure out who they are and how to regain their zing. The Lakers, meanwhile, are rested, getting healthy and look increasingly sharp. A strong win tonight would be a springboard to the Thursday battle royale in Cleveland.

One final note: our sister blog, Orlando Pinstriped Post, is one of SBN's best. They'll have much more on tonight's game, and it'll be worth your time to pay them a visit. If you do, please be excellent to everyone over there.