Share All sharing options for: Back-to-Back Preview: Spurs and Mavs

All right, let's hit the good news first. Pretty soon, you'll get to stop hearing people talk about all the home games the Lakers have played. It'll be a relief to put that talking point to bed once and for all.

The downside is, to get there the Lakers actually have to go out and play a bunch of road games. And if you've been following our story so far, you know they've been pretty miserable away from Staples more than occasionally. Their last really good road win was probably in Houston, on November 3rd. That was 10 weeks ago.

Anyhoo, it all starts tonight with a back-to-back set. Let's peep the schedule and see exactly who we play. First up is.... uh, San Antonio. And then there's Da-... yeah, Dallas. Crap.

Chris Bosh, how soon can you get here?

Before looking at our opponent up close, let's quickly tick through the health issues that plague Lakerdom at this hour.

Pau Gasol still has a strained hamstring and is listed as doubtful for tonight and tomorrow. "Doubtful," by the way, is Lakerese for "not going to play." And "day-to-day" means "we have no idea when he'll be back so ask us something else."

Kobe Bryant still has a right index finger that was avulsively fractured and keeps him from shooting straight. He'll return to wearing a metal splint after playing without it in his nightmare first half on Sunday. Over the past four games Kobe has missed two-thirds of his shot attempts.

Ron Artest bonked his melon anew against Milwaukee, playing only 19 minutes. He also has plantar fasciitis in his left foot and a sore right foot.

Luke Walton: is still at least a few games from returning. He still hasn't gone through a full practice.

A Look at the San Antonio Spurs

Our old friends the Spurs present an odd picture these days. They're 22-13 so you think they're nothing special, but then you look into the next-level numbers and see elite-team signifiers. They're third in the league in net points (after the Lakers and Celtics), fourth in Offensive Rating and eighth in Defensive Rating. And then you see the schedule, and it's hard to find any impressive wins. They've beaten an above-0.500 team only once in their last 24 games.

A lot of vectors pointing in a lot of directions.

The Spurs run the same boring offense you remember, with many of the same boring players. Tim Duncan (still badass) and Tony Parker are the high-volume options, along with Manu Ginobili off the bench. Rookie DeJuan Blair is a rebounding goblin. The role of annoying Sean Elliottonion small forward is played by Richard Jefferson, and for outside gunnery they've got George Hill and Roger Mason. It's been a while since the Lakers and Spurs had one of their really epic battles, but these guys are still a total pain. 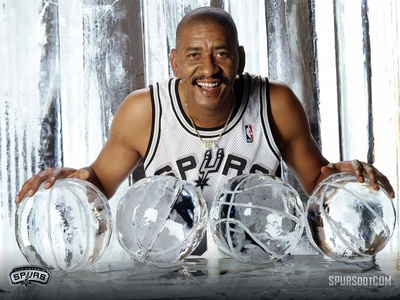 What San Antonio does really well is shoot the ball. They're among the top three in both two-point and three-point accuracy, both good skills to have. Andrew Bynum will be called on to handle Duncan's cavalcade of post moves without fouling. And somehow, through black magic or ritual sacrifice maybe, the Lakers as a team have to figure out how not to let Parker make them look ridic.

The Spurs can play them some D as well. They're the worst team in the NBA in forcing turnovers, but they're the black-belt masters of positional defending. They force tough shots and get the rebound when you miss.

It's a bit hard to see how the Lakers are going to generate enough points to win this one. In three of their last four games the offense has been a warmed-over turd. Still Pau-less and hampered by Kobe's bum shooting stroke, they don't seem equipped to take on a defense like the Spurs'. Kobe will need to take on a smaller role in the offense while his finger heals, and multiple guys will need to pick up their shooting. 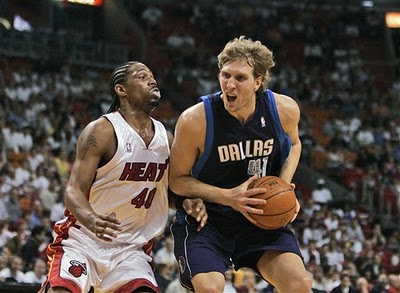 A Look at the Dallas Mavericks

We saw the Mavs just last week, when they got blown apart at Staples. That was when they were finishing off a back-to-back and long road trip and were clearly not up to competing. On Wednesday night they'll be rested and spritely, and it's the Lakers who'll have done battle the night before.

Since the game on January 3rd, Dallas has won two (at home against the Pistons and in San Antonio) and lost one (at home to Utah). Erick Dampier, who missed their last game against the Lakers, is back in the lineup. That'll make life less cushy for Drew in the paint. Otherwise they're the team you remember.

As you can probably tell, I'm not feeling good vibrations for this trip. The Lakers have soooo not impressed lately, and these opponents are quite good teams. Dropping both games would sadden but not surprise me. A split would be more than acceptable.

All statistical terms defined here. Parentheses indicate league rankings. Numbers are courtesy of Basketball Reference and HoopData and, except for record and net points per game, are through Sunday night's action.