A Beginner's Guide to the Bynum-Bosh Rumors

Share All sharing options for: A Beginner's Guide to the Bynum-Bosh Rumors

Regulations governing NBA bloggers require me to lecture you about trade rumors. I'm supposed to remind you that most rumors are dubiously sourced, promulgated by teams and agents for selfish purposes and more or less beneath your dignity. I'm supposed to treat you like you're gullible dipshits who don't know these things and will believe any misshapen hunk of scurrilous gossip that lands on your screen.

I'm not going to do any of that. You're smart people. You know the difference between trade rumors and, you know, actual trades. I'm going to skip the pedagogy and just absorb whatever fine the Bloggers' Union throws my way.

Speculation is out there that the Los Angeles Lakers will seek to acquire Chris Bosh before the February trade deadline. Rumor has it Andrew Bynum would be the key asset shipped out. Let's figure out what this all means.

1.  Where is this rumor coming from?

Peter Vescey. Writing yesterday in the New York Post, Vescey cites a "Laker source" as claiming that the team wants to acquire Bosh this season. His anonymous source believes that the Lakers will offer Bynum to Toronto, if they haven't done so already.

3.  Is a Bynum-for-Bosh trade doable under the salary cap?

Yes, but the Lakers would have to jump through a few hoops to get it done. Drew is a "base year compensation" player, which is salary capese for "He recently signed a big contract extension, so he's hard, but not impossible, to trade." To solve the BYC problem, the Lakers would need either to (i) include more outgoing salary in the trade than they otherwise would, or (ii) wait until July 1 of this year, when Drew's BYC status expires.

Let's say the Lakers don't want to wait until July to get Bosh. A trade of Bynum, Jordan Farmar and Adam Morrison would be valid under the cap. In fact, that's the most likely combination of players that the Lakers would send out.

4.  What effect would this have on the Lakers' payroll?

Over the very short term, the Lakers' payroll would drop. Bosh makes $15.8 million this season, whereas the trio of Bynum ($12.5 million), Farmar ($1.9 million) and Morrison ($5.3 million) makes a combined $19.7 million. Bosh, though, can opt out of his contract after this season, and there's no way the Lakers make this deal without signing Bosh to an extension. That means a max contract or something very close to it.

Bosh would make more than Bynum is pulling in right now. The Lakers will be above the luxury-tax threshold for the foreseeable future, so every dollar of incremental payroll in effect costs them $2. As a result, if they pay Bosh, say, $4 million more per year than they'd otherwise pay Drew, that would add $8 million of expenses to the team's bottom line. 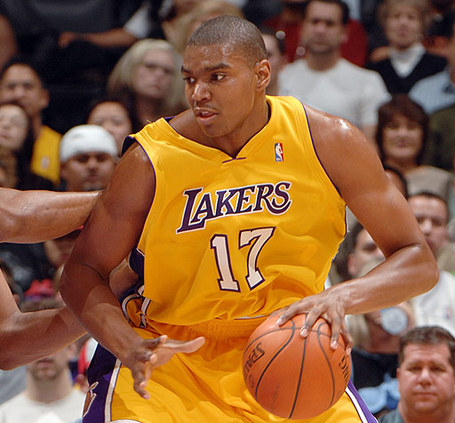 5.  Would Bosh sign a contract extension with the Lakers?

Only he knows, but there are plenty of reasons he might say yes. The Lakers have long been the most popular destination for elite players able to choose their teams. They're the most glamorous franchise in the league, among the best run and will be contending for championships in this and many future seasons. For a guy who's toiled his whole career on 0.500-or-worse Toronto squads, playing into June alongside Kobe Bryant and Pau Gasol has much to recommend it.

The only downside is that Bosh wouldn't get to be the alpha dog. With Pau around, he wouldn't even get to be the beta dog. How much he'd care about this, we can't begin to say.

6.  Why would Toronto make this trade?

Because Bosh is probably going to walk after this season, and they might want to get something for him while he's their asset. They could do a sign-and-trade deal after he opts out, but there's no guarantee Bosh would cooperate. He could just decide to sign straight up with another team and leave Toronto with zilch in compensation.

If the Raptors just want to dump salary, that scenario doesn't trouble them. But if they want talent in return, Bynum might be the best they can get. He's young, highly skilled, still improving, signed a reasonable contract, and he plays a position of need for them. (No, Andrea Bargnani isn't a real center.) And they'd hold Farmar's restricted free agent rights, meaning they'd have some leverage to hold onto him if they so choose. Morrison is pure salary runoff.

7.  Why would the Lakers make this trade?

Because Bosh is a legit top-10 player, and when you have the chance to get your hands on one, you generally do it. Bynum is enormously talented and could become a franchise talent one day. Bosh is a lready there. He's also only 25 years old.

On the court it would take time for him to learn the Lakers' systems, but he's smart, versatile, an excellent passer and by reputation has a good work ethic. Any doubts that I have about his fitting into the Triangle are minimal. 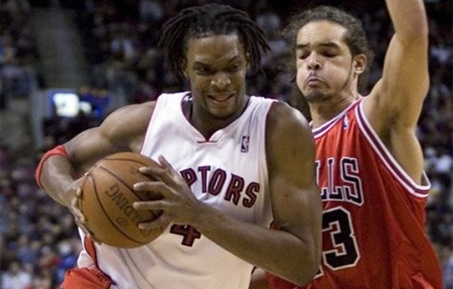 Because they love Andrew Bynum. They drafted him when it wasn't the obvious move. They've refused numerous opportunities to trade him over the years. They signed him to a rich contract despite two serious knee injuries. Clearly, the franchise believes in the guy and won't lightly ship him elsewhere.

Bosh's presence, moreover, forces Pau into fulltime center duty. He can do it - hell, the Lakers won a championship that way - but it's not ideal. He's a natural power forward, and his reedy frame wouldn't take as much abuse at the four spot.

Furthermore, we shouldn't overlook the cost of losing Farmar. I'm not sure he'll ever be a starting-caliber point guard, but he's one of the Lakers' few semi-dependable reserves. Losing him midseason would cost the team a big chunk of its already scarce bench depth.

Finally, there's the money issue. The Lakers are already paying out more for salaries and luxury tax than any other team. Do they have the appetite and ability to crank it up even higher to get Bosh? Without access to the team budget and financials, it's impossible to know.

On the one hand, Jerry Buss has always shown a ruthlessness, and a willingness to open the team coffers, when a luxury asset is on the market. On the other hand, some of the team's recent roster tactics - selling this year's first round draft pick, hardballing Trevor Ariza, really hardballing Lamar Odom - suggest that the budget might be tapped out.

9.  How many times a day should you check back with Silver Screen and Roll to keep tabs on this story?