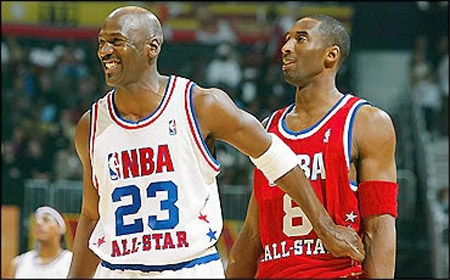 I know this isn't Lakers news, but The Greastest Of All Time gets inducted into the Hall tomorrow.  While I'm sure there are many Lakers fans who may think Magic deserves to be considered the GOAT, Jordan is the most accomplished player ever to lace them up.  Congrats, Mike.  I'm glad enough I'm old enough to have watched you in your prime.

Here are some Kobe vs. Jordan Highlights:

Click on through for more links after the Jump...