[Ed. Note:  With Magic Johnson having just turned 50, tributes to the player that many Lakers fans probably still consider the best ever have flooded the internet and sports channels. Ironically, one of the best I've seen around these parts comes from a Spurs fan. Thank LatinD for this tribute.] 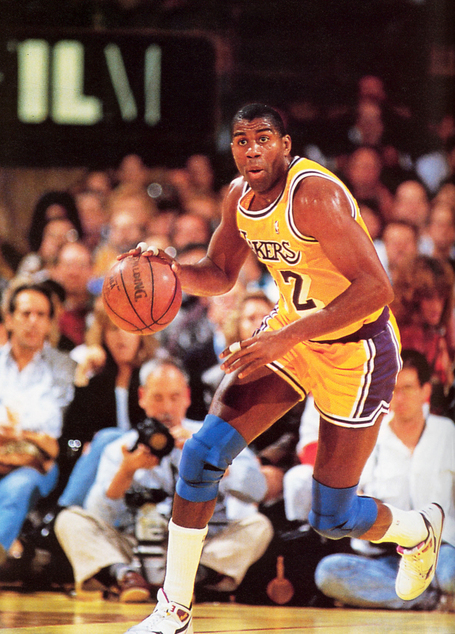 I discovered the NBA thanks to His Airness, Mr. Michael Jordan, so I only caught the final years of Earvin "Magic" Johnson's incredible career. I'm probably not the biggest Magic fan in here - hell, I bet I'm not even the biggest Magic fan from my country - but through the years as I grew to love this league and learnt more of its history, I watched Magic play many incredible games that were forever etched in my memory. He is a true legend - and probably my favorite Lakers player of all time.

As all of you know, Magic turns 50 tomorrow and NBA.com has been celebrating the occasion. NBA TV will be showing many of his classic performances, and the league's YouTube channel has put together a series of great special features about him. I'm sure most of you have already seen them, but in case someone missed these videos, I thought I'd put together a short FanPost with all of them, just a click away. (I checked the recent FanPost and FanShots and couldn't see them anywhere. I apologize if this is a double post.)

Fewer platitudes and more videos, after the jump:

Magic Johnson Turns 50
Yeah, yeah, I already said this. Just an introduction to the series of videos, but still worth watching because of the vintage footage.

Top 10: Magic Johnson Assists
Where's that other 6-9 guys that could pull off bounce passes from half court? If someone says "LeBron" I'm going to slap you silly. Magic had 10141 career assists, good for 4th all-time in the NBA. And yet stats can't describe it, so just watch the video.

TOP 10: Magic Johnson Clutch Plays
They say some players just live for the clutch, while others wilt under the pressure. Well, Magic was time and time again one of the best closers that ever played this game, and some of the shots you'll see are out of this world and make me want to shout "I love this game" and dress in brightly colored clothes.

Magic Johnson's Sky Hook against the Celtics
Oh, that reminds me: whoever says Magic should've passed in this play deserves to be stabbed. Don't ruin it, please.

Magic Johnson Wins MVP at 1992 All Star
It's sad to know that HIV robbed us of 4 years of watching Magic play, but at least he's healthy and hopefully will live a long life. And won't try to coach again. (Oh, and anyone remembers that Karl Malone didn't want him to play because he could contaminate him and other players? Meh.) And yes, he made that final triple.

Magic Johnson's 1st Game as NBA Player
They don't make 'em rookies like this any more. That happy hug at the end is hilarious - poor excitable kid.

Magic Johnson Plays Center in 1980 Finals
I think this game is Magic's best argument for the GOAT title that he'll never get. Who has 42 points, 15 rebounds, 7 assists, and 3 steals in the decisive game of the Finals, in his rookie season, while playing minutes at center, forward and guard? Who wins the Finals MVP award as a rookie? Answer: no one. Perhaps the clutchest performance ever, and it was Magic's.

So there you go. I'll be updating this post if the NBA releases move videos. Hopefully it will, because I personally can't get enough of them.