Re-Signing Lamar Odom Is Not Optional

Share All sharing options for: Re-Signing Lamar Odom Is Not Optional

The Lakers' negotiations with free agent Lamar Odom are, to an uncomfortable degree, dragging.

Specific numbers have not been made public, but there appears to be a difference of a couple million dollars in annual salary between the Lakers' bid and Lamar's ask. In its latest bit of reportage on the topic, the Los Angeles Times on Thursday told us that Lamar is hoping for $10 million per year, while the Lakers have offered a deal "likely within a million or two of the average NBA player's salary of $5.85 million." On Saturday, the Orange County Register, quoting Lakers assistant general manager Ronnie Lester, updated us with news that the Lakers are now offering slightly more than $8 million annually. The gap may be closing, but it's not yet closed.

It's time for Dr. Buss and Mitch Kupchak to bring these negotiations to a conclusion. They need to meet Lamar's asking price, or come so close to it that re-signing with the Lakers becomes a surpassingly obvious decision for him. If the latest reports are correct, what separates the two sides is less than $2 million per year. Taking into account the NBA's dollar-for-dollar luxury tax (and the deductibility of player compensation under federal and state income tax laws), what the Lakers are now haggling over will amount to less than $20 million in net expenses over the life of the contract. Although on its face this looks like a substantial figure, in the context of the Lakers' operating budget it is not. And it doesn't justify risking Lamar's departure and the resulting dent that would make in our prospects for additional titles.

Laker management needs to stop worrying about what Lamar costs, and start focusing on what he's worth.

To that end, allow me to unpack several important truths that should inform any thoughtful consideration of l'affaire Odom.

I.  Re-signing Lamar will make the Lakers the favorite to win the title, as opposed to merely a favorite.

Of the various causes behind the Lakers' recent championship run, the most basic and important was their ability to deploy elite talent in overwhelming amounts. Kobe Bryant and Pau Gasol are two of the seven or so best players in the world. Lamar is somewhere in the top 20. Andrew Bynum performed like a top-25 player in spurts, and Trevor Ariza was well above league average. The end product was just too much for any opponent to deal with. The Lakers had too many ways to score points and too many players who were good at keeping the other guys from scoring.

Trevor's gone - we know this. So what would it mean to lose Lamar as well? It would mean that the team needs to replace about 4,300 minutes of high-level regular season play at the forward position. Ron Artest has never logged more than about 2,700 minutes in a season, so even if we assume that he repeats his career high in playing time, we're still left with a deficit of 1,600 minutes, or about 20 per game. That's 20 extra minutes a night of Luke Walton and Josh Powell, where we're accustomed to seeing borderline all-star production instead. In scientific terms: no es bueno.

Meanwhile, the challengers to the throne have been restocking their armories. Orlando welcomes back a healthy Jameer Nelson, has upgraded from Hedo Turkoglu to Vince Carter and has picked up a trade exception they can use to acquire further reinforcements. Boston gets KG back and has added Rasheed Wallace. Cleveland bought itself a used Shaq. San Antonio has brought Richard Jefferson and Antonio McDyess on board for a last glorious charge in the Duncan era.

If the Lakers re-sign Lamar, none of this matters. A title is never guaranteed, of course, but the Lakers would remain pretty clearly the team with the most championship-level players in the prime of their careers. Maybe none of this matters anyway, but why take the risk? The Lakers are primed for a two- to three-year run as the NBA's sole superpower. Allowing that historic opportunity to slip away just to save a little payroll would be a shortsighted failure by a franchise not known for them. 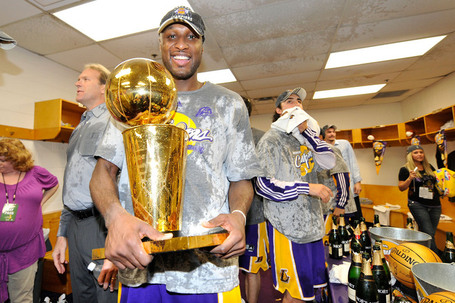 II.  The Lakers both can and should "overpay" for Lamar.

Let's stipulate that Lamar's "market value," meaning the amount that another team would be willing to pay him, is $8 million per year. Does this mean that the Lakers shouldn't sign him for $10 million a year? Not at all!

Lamar is worth more to the Lakers than he is to any other team. His unusually diverse skill set seems almost genetically engineered for the Triangle offense, and the presence of two alpha dogs in Kobe and Pau means he can thrive in the supporting role that seems to suit his temperament. Over the course of last season, we saw him fill every of several supporting roles he was variously asked to play - inside and outside defender, rebounding maestro and initiator of the second-team offense, to give only a few examples. To have an all-star talent fill roles typically performed by average players or worse is an enormously valuable luxury, and one for which the Lakers should be willing to pay a premium.

And the Lakers, more than any other team except possibly the Knicks, can certainly afford luxuries.

The salary cap rules foster the illusion of the NBA as a classless society, with all franchises on equal financial footing, but behind this illusion is a highly stratified competitive environment. Franchises fund player salaries out of widely varying revenue streams. The Memphis Grizzlies, for instance, don't generate as much money as do the Celtics. The Celts sell more tickets, they sell more expensive tickets, and when's the last time you saw someone wearing a Memphis jersey who didn't actually play for the team?

The Lakers, for their part, are rolling in cash. They are the upper, upper class of the NBA - the basketball version of the Yankees, if you will, which isn't an exaggeration. They sell out every game at some of the highest ticket prices in the league. They've reached the Finals two years in a row, meaning a couple dozen extra home games at even higher-than-normal ticket prices. They've sold untold amounts of advertising and licensed merchandise.

In short, the Lakers have the financial wherewithal to bankroll a top-end roster. If other franchises are struggling at the gate and can't afford a $10 million power forward, that's no excuse for Dr. Buss to cheap out. 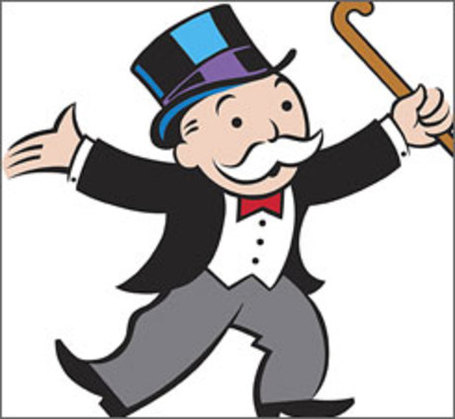 III.  The Lakers don't get to blame Lamar if he signs with another team.

There are all kinds of nonmonetary reasons, we're told, for Lamar to re-sign with the Lakers. He loves living by the beach! He can stay and win some more rings! He'll get to play with Artest, his old AAU buddy!

All true, I'll concede, and all valid. But the thing is, people don't like to be told they're worth less than they think they are. It's irritating and bad for the self-esteem, and if you get told this over and over by an employer for whom you think you've done good work in the past, it gets very old very fast. And the odds grow that you'll decide to go work for someone else even if the money's not much better. Like hanging at the beach and playing hoops with your buddies, telling an ungrateful employer to f-ck off can be very satisfying.

Would that be an irrational decision on Lamar's part? Yeah, definitely. But he's a human being - we all make irrational decisions every day. This isn't freshman microeconomics; it's a negotiation with a real person who might do something you don't expect and can't explain. It's the job of Laker management to make that as unlikely as reasonably possible. If Lamar walks because of annoyance with the negotiations, the team will still have to answer for any pound-foolishness on its part. 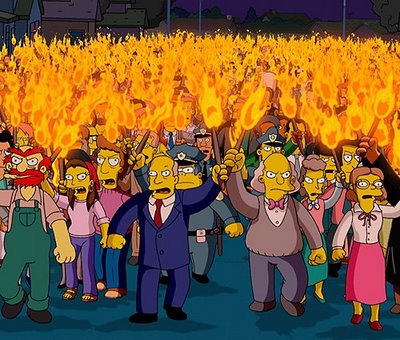 IV.  Don't let anyone tell you that this isn't "your money."

You hear this a lot in nearly any free-agency discussion, and I'm really making a point here that's broader than just the Odom contract. In arguments for or against signing a particular player, you'll eventually hear a fan or commentator suggest that we don't really have a say in these things because we're not spending "our money." This is dead wrong. It is most definitely your money, and you have a stake in whether it gets spent on players or, alternatively, pocketed by team owners.

The Buss family isn't a central bank. They don't print currency with Jerry's face on it and use that to meet payroll. They fund player salaries and other operating expenses with revenues generated, directly or indirectly, by the fans. Those expensive tickets you buy, the expensive beers you drink at Staples, the Lakers-licensed merch you wear... everything ultimately comes out of your pocket. The Lakers are a product, and you its consumers. You have a right to demand that the product be of the highest quality.

So, Mitch and Dr. Buss... sign Lamar. Make it rain for the man, and there won't be any trouble. 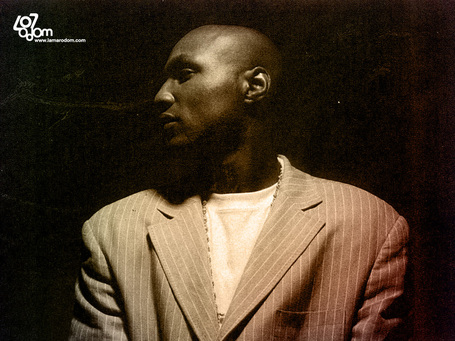