Why the Orlando Magic Are Tougher Than You Think They Are

Share All sharing options for: Why the Orlando Magic Are Tougher Than You Think They Are

We middle-aged dudes may not be able to party like rockstars anymore, but we do know how to do some things right. An icy glass of 12-year old Glenfiddich and a nice cigar on the deck in the afternoon shade, while we ponder the big questions of the NBA. Such as, for example: how the hell could I possibly have written an article as farcical as "Why the Cleveland Cavaliers Are Tougher Than You Think They Are" with a straight face?

That one can't be done outside the bounds of fiction, I say — you just cut and paste a few pictures of Lebron, maybe a 2-by-2 of Mo Williams (otherwise he'd hold a press conference about how the Cavs are so "disrespected" by the NBA) and there ya go.

Faced with the most difficult of matchups with their arch-nemesis, the Orlando Magic, the Cavs took a huge step backwards to the bad old days of #23 + 0, delivering more LBJ on TV than at any time since the Vietnam era. Nikeboy's numbers were sweet, but the losses racked up and not even the Coach of the Year (cough cough) could pull the hapless Cavs out of the dumpster...

The Cavs were swept away by their betters in 6, becoming the answer to some trivia question or another about the historic big, sloppy splatters of overall #1s...

And therein lies your first clue that the Orlando Magic truly are Tougher Than You Think They Are. The Lakers had their 3rd best season in franchise history, the stuff of which World Championships have been made — but the Cavs did them better during the regular season. And Orlando put them down and out in the pressure-packed spotlight of the NBA Eastern Conference Championship series. Convincingly.

Such things are not accidental.

So let's take a few minutes to pore over, once again, the roster of the Orlando Magic. 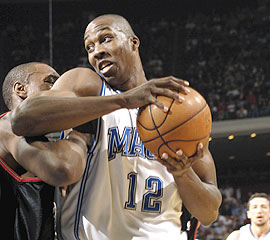 Do you know this man?

Of course, you do.

He is Dwight Howard — TV commercial phone buddy of Charles Barkley and Dwayne Wade, star of the WWENBA's All Star Weekend Slam Dunk Super Spectacular, Superman, First Team All NBA Superstar Center. Better than Shaq, better than Yao, better than Bynum and Oden going tag team. He has about 3 moves, all ending with the sound BOOM. He broke the 24 second clock attached to the upright during the Cleveland series.

So here are a few things you might not know:

1.  Howard is the greatest rebounder in the NBA. He is averaging an astonishing 15.4 boards in these playoffs, tops among anybody and everybody that has laced them up this year. The top Laker rebounder, Pau Gasol, is over four rebounds a game in his rearview mirror. Howard was also #1 with a bullet during the regular season, pulling down 2 more rebounds per game than his closest competitor.

The Lakers must use great technique, all the time, trying to keep Dwight from mauling them on the glass. Failure to do so, particularly late in games, could prove decisive.

2. Howard can be fouled out. During the season Dwight's 3.4 fouls per game ranked #3 among qualified post players, behind Denver's Nené, but ahead of guys like Shaq, Yao Ming, and Marc Gasol. Furthermore, he's currently sitting at 6 Five technical fouls in these playoffs — and the next one with two more he picks up is going to cost him a one game suspension (although he's probably gonna have to drop trou and wiggle his behind at David Stern before that one is those are called, admittedly). During the regular season, Howard racked up 14 Ts and an ejection, leading all Centers in the NBA. Can you say "Anger management issues"?

3. Impressive showing during a couple late games in the Cleveland series notwithstanding, the concept of intentionally fouling Howard remains viable. Throughout these playoffs, Dwight Howard is shooting just under 65% from the charity stripe. While not dismal and abysmal, that is a percentage upon which you can roll the dice late in games. This percentage is just slightly better than his 60.1% career FT percentage — which actually went down to 59.4% in the current season.

A couple good games from the line do not mean the leopard has changed his spots. If the situation calls for someone to be put to the line, Dwight Howard remains the guy, despite the 12-for-16 performance he turned in in Cleveland Game 6.

Dwight Howard is the Alpha dog of the Orlando offense. The omega are the perimeter shooters. It is nevertheless essential to neutralize the Orlando presence in the paint — and that means Dwight Howard.

Howard plays around 38 minutes a game, leaving about 10 for his backup, 6'11" Polish 2nd year player Marcin Gortat. Gortat is averaging 3 and 3 in 11 minutes during this playoff, which — while healthy — is not the sort of production that will keep PJ from getting a good night's regeneration in the hyperbaric chamber. 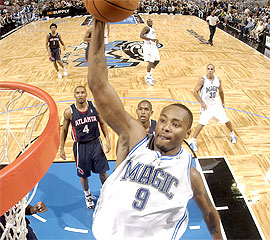 The most notable thing about 6'10" Magic PF Rashard Lewis is his contract — many years at megabucks. Formerly a quality mid-level player with the Seattle SuperSonics (RIP), Lewis turned in his road green uni in 2007-08 for wheelbarrows of greenbacks (paying him $16.5M this year), which seems to have been quite an astute career move, all things considered.

What did the Magic get from the 11 year pro for this stash of cash? An average of 17.7 ppg and 5.7 rebounds in just over 36 minutes. Not shabby. Lewis has upped the ante in these playoffs, torching the opposition for nearly 19.5 points a night.

It is imperative for the Laker bigs not to fall asleep on Lewis in their efforts to limit Howard's production to human levels. A 39.1% shooter from outside the arc, Lewis is a bit of a PFINO — the soul of a 3 in the shell of a 4. One should not take this as a diss, however, Lewis is a two-time All Star for a reason. Quite simply: he can play.

In the limited time he is on the bench, Coach Stan Van Gundy tends to go small with it. There is no discernable glass-eating backup from the Paul Millsap/Brandon Bass mold on the Orlando bench. 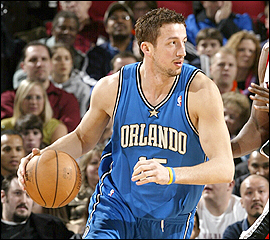 The Magic's Small Forward is the "Michael Jordan of Turkey," Hedo Turkoglu. This son of a bitch beat my Blazers at the Rose Garden this year with a last second 3-point chuck — when the chips are on the table, he's the guy that Van Gundy will look to have slinging the rock. Take that to the bank. Hedo is something of a swingman, even carrying the ball on occasion. He does not sit in the corner in the Orlando system, but plays side to side at the top of the key, much like a guard.

The 9 year pro Turkoglu's game reminds me a bit of that of New Orleans' Peja Stojankovic — if he is left unmolested behind the arc, he will chow down like a ravenous coyote on li'l Bunnyfluff the Lamb. But Hedo is bigger (listed at 6'10") and stronger (no duh) than Peja and can get to the rack a la Brandon Roy when he puts his head down and goes. Turkoglu will be a very tough matchup for Trevor or Kobe. He's a great player, actually, highly underrated.

Turkoglu averaged over 17 points a game against the Cavs — an impressive output considering that both Howard and Lewis were also going to town. He was basically a 17-and-5 guy during the regular season. 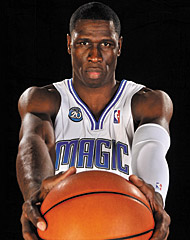 Hedo will give Van Gundy 38 or so a game, leaving 10 minutes to the account of swingman Mickael Pietrus. Pietrus, one of about 9 French players in the NBA, usually plays about 25 minutes a night, averaging over 10 points per game in these playoffs. At a listed 6'6", Pietrus has the size and the strength to handle play at the 3, while having the agility and shooting touch to light things up as a shooting guard.

Probably the key player off the Magic bench, Pietrus is yet another of the Magic's 3-point threats, averaging a handsome 39.3% in these playoffs from downtown (that is, an effective shooting percentage heading towards 60%). During his 6 year career, which began with the Golden State Warriors, Pietrus has shot over 35% from beyond the arc, averaging nearly 9 points a game. He provides pop off the bench and allows Van Gundy to play a fairly big lineup at all times, even when he is "going small" by sitting Turkoglu.

Pietrus is strong and athletic and there will be no rest for the wicked when he is up off the bench.

They can't all be double-figures racking All Stars and 6th Man of the Year candidates, can they?

Fortunately, there is a chink in the armor and that is at the Shooting Guard position, held down by former Western Kentucky rookie Courtney Lee.

At a listed 6'5" tall, Lee is big enough to play with Kobe Bryant, but he is also green, green, green and there would seem to be no way in hell that Stan Van Gundy would allow that matchup to show itself on the floor. Lee has not been hapless in these playoffs, averaging 8.8 points in nearly 29 minutes of play, but neither has he been a go-to guy on the offensive end. Nor is Lee regarded as an elite defender. More like a "pretty okay space-filler" while the killer front line of Howard inside and Turkoglu + Lewis outside go to town.

Lee is one of the weakest 3-point bombers on the 3-point bombering Magic team, shooting at just 30% under the bright lights of the playoffs. During the regular season he was a 40% bomber, however, so if there's any move towards the mean, Lee will be advancing rather than regressing as he jacks up the long treys.

As mentioned above, swingman Mickael Pietrus plays many of the backup minutes at the 2.

Oh, isn't this fun? Will former All Star Jameer Nelson be back from shoulder surgery to torture the Lakers? Or will former New York City playground legend "Skip to My Lou" a.k.a. Rafer Alston continue to carry the ball for the Orlando offense? We will soon find out.

The smart money seems to be on former Houston Rocket Alston continuing as the starter. The shoot-first, shoot-second, pass-third Alston has managed a healthy 12.7 ppg in about 33 minutes during these playoffs, including a 35% rate from distance, making him a valuable part of Van Gundy's inside-outside attack. Alston has the lateral quickness to stay with any and all of the Laker guards and will present Derek Fisher with yet another in a never-ending series of defensive challenges.

The 15 or so backup minutes will probably be yanked away from journeyman Anthony Johnson in favor of the returning Nelson, who is chomping at the bit after 4 months on the shelf. It should be interesting to see how much rust has accumulated during this interval. If Nelson is able to return to anything like his 16.7 point (45% from distance) form, big advantage to the Magic.

The Orlando Magic have the best Center in the league, quality Forwards in Lewis and Turkoglu, and 3-point bombers all around. The Lakers and their fans will overlook them at their mortal peril.