I could go on and on about what this means, but you already know, and you'll read plenty about it in today's links.  But, damn!  This feels good.  I can't say this enough.  How good does it feel?  Well, I'm a Red Sox fan who waited 25 years to see a World Series win.  I watched them come back from 0-3 to the Yankees in the ALCS, then sweep the Cardinals.  And still, that could not come close to last night.

Watching Kobe put his legacy in perspective, with his team, after years of doubt is one of the best moments I've ever experienced in sports.  Only, this wasn't just about Kobe.  It was about the whole team.  It was about everything that led up to this moment.  The struggles they went through starting in '03-04.  The gradual improvements. The injuries.  The failure in the Finals.

This team was organic.  They were built from the ground up, and even though they acquired Pau only midway through last season, he dealt with doubt and failure too to get here.  The loss to the Celtics taught this team a lesson that couldn't be learned without the unfortunate circumstance of experiencing it.  From Phil to Kobe to Pau to Lamar to Ariza to Fish to Mitch Kupchak.  Everyone on this team had to overcome naysayers and shortcomings to finally be able to stand where they are today as the Best basketball team in the world.  That is why this feels so good, because we had to struggle to get back here. 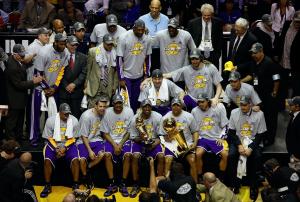 Lakers 99, Magic 86: Lakers Win 15th Championship - Silver Screen and Roll
Lakers players and fans soak up the overwhelming experience of winning the NBA Championship. 15 for the Lakers; 10 for Phil Jackson, 4 for Kobe; 1 for Gasol. This one is for them, and for you.

Forum Blue And Gold " 15
Bask in the moment, soak it up. There are so few moments of pure joy in life, so few moments where we as a collection of people with a common bond can truly revel in something.

20 Second Timeout: Maestro Bryant Orchestrates Lakers' Championship, Wins Finals MVP
Perhaps Kevin Garnett, who had his own critics to answer after spending most of his career getting bounced in the first round of the playoffs, put it best last year as he exulted just moments after his Boston Celtics won the championship over Bryant's Lakers: "What can you say now? What can you say now?"

More after the Jump...

Daily Dime: Kobe named MVP as Lakers win NBA title
...this series that solidified his career was strangely devoid of his personal stamp. There was no Junior Sky Hook, no Spectacular Move, no Shrug, no Shot. ... What Bryant had was a private realization, a chance to collect his thoughts and sort out what this seven-year odyssey since his last championship has meant. It came with 8:19 left in the fourth quarter of Game 5, right after Bryant hit a 3-pointer that put he Lakers ahead by 16 points, forcing yet another Orlando Magic timeout. Bryant stopped just before he got to the bench, bent over and held his clenched fists in front of his face, looking like a ski jumper about to head down the ramp. Finally the moment was at hand.

The Big Run That Won It for the Lakers - TrueHoop By Henry Abbott
...the run that proved to be fatal was the 16-0 run they surrendered to the Lakers in the second quarter of Game 5 Sunday night.

(You could feel it too.  The Lakers broke their spirit in this stretch.  They killed the Magic's will and it was obvious.)

NBA Finals: While Lakers celebrate, Howard watches and learns
"Don't go anywhere." Want to know why Dwight Howard and Jameer Nelson sat there on the Magic bench, blank expressions adorning their faces, after that final buzzer? Why Superman and one of his All-Star sidekicks stuck around as the championship trophy podium was hastily assembled and the Lakers stood victorious atop it? Because that was what Howard wanted, and he wanted Nelson to witness, feel and share every raw, painful emotion that was tearing him apart inside.

(Something occured to me reading this article.  I think Dwight wanted Jameer Nelson in there, and that is why he played.  Nelson is dwight's guy, in the same way Fish is Kobe's.)

Lakers have learned a lot by winning a title

City, team to split cost of Lakers victory parade
Neither the Orlando Magic nor a disintegrating city budget will stand in the way of the Lakers' victory parade, which is scheduled to follow a two-mile route from the Staples Center to the Coliseum on Wednesday.

Laker, Kobe on top of the world |
Lakers co-captain Derek Fisher remembers the date they arrived for training camp: Sept. 30. On that date, Fisher recalled, "We were still frustrated. We were still angry." Beginning that day, every day through Sunday, the Lakers had one goal on their mind and in their huddle. All season long, they yelled as the broke their huddle: "One, two, three … ring!" Now, everything pent up from the 2008 NBA Finals loss to the Boston Celtics has been released.

A championship breakfast for all - Lakers blog
No sooner had the final buzzer sounded when commemorative boxes of Wheaties appeared with the Lakers’ team picture on it and the words "2008-09 NBA champions."

Without a signature move, Kobe wins a title
His signature. That’s all this game lacked now. Just Kobe Bryant’s name written – spectacularly, no less – one final time in this imperfectly perfect season. So, with the Lakers’ 99-86 victory waning Sunday and the franchise’s 15th NBA title secured, Bryant went hunting for his signature shot. This was the Lakers’ championship, but this was Bryant’s crown. This was his team – repeat his team – like never before, his greatest triumph about to come free of Shaq’s shackles. His signature. That’s all that remained.

(I disagree.  There was a signature move. Read below.)

Lakers pull away from Magic, win championship in five games - Ball Don't Lie... - NBA - Yahoo! Sports
Two teams battled through the 2009 Finals, providing three close games in five chances, but even with that attempt at parity, it's clear that the Los Angeles Lakers were just a giant step above the Orlando Magic. The Lakers, on the other hand, were loving life. You got the feeling that they knew how good they were, milling around the locker room, but without the perceived batch of arrogance that they were accused of during the first three rounds of the playoffs. Instead, the champions seemed almost ready to play another series. Almost ready to take on another Finals, or another season, or the Magic in a best of nine. Confident, yes, but also appreciating the moment and what it represented.

Lakers' Fisher reflects on his latest NBA championship - LA Daily News
Derek Fisher sat in a quiet corner of the visitors' locker room Sunday night at Amway Arena, drenched in sweat and champagne after the Lakers defeated the Orlando Magic to win the NBA championship. He spoke quietly and earnestly about winning for the fourth time in his career. He later climbed a podium inside a dank room deep within the arena and attempted to put into words what it meant to win with a new cast of characters. His first three titles were won with veteran teams; the latest was with a less experienced roster. Fisher said this team was closer than the teams that won from 2000-02.

Kobe Bryant shows maturity in leading Lakers to 15th NBA title - Ian Thomsen
Look how I've changed, the young Kobe might have said. Kobe Bryant looked in the mirror in the late afternoon Sunday and saw buried reflections of his former self. ...The young Kobe used to seem very much alone, especially in victory. But the Kobe Bryant who rules his sport today finds himself encircled by respect and gratitude. As the last seconds of the long seven years ticked away, he was embraced by teammates and coaches who appreciated all that he had done for them.

Three Observations
1. This was the season, the series and the game that will define Kobe Bryant.
2. Trevor Ariza is the 2009 version of James Posey.
3. Bryant was the Finals MVP ... but let's not forget Pau Gasol's performance.

Off the Dribble - In Bryant’s Shining Hour, a Shaq Attack of Trade Talk -
Rumors of an O’Neal trade to Cleveland got new life when The Arizona Republic and ESPN.com, citing unnamed sources, reported over the weekend that the proposal had been revisited.

Quantifying Basketball’s Intangibles, With Some Help From Computers
Perched high above and adjacent to the court, six high-definition cameras in a semi-circle have captured and traced the movements of each player, the referees and the basketball in Games 3 and 4 of the N.B.A. finals at Amway Arena. The cameras streamlined information into two data processing computers tucked behind the rafters that are aimed at rapidly defining an N.B.A. game in a way that has not been seen before. Through the processing computers, the data became relative and relatable. For example, the cross-angle cameras confirmed that a goaltending call on Orlando’s Dwight Howard was accurate. When Howard blocked the shot by Andrew Bynum, the ball had already descended about 3 inches, according to the computers. In a game of swift movements, when one play can decide the outcome, the technology could be an important step toward verifying the accuracy of calls made by officials. The system is still in its infancy and will continue its trial run through next season with the hope it can be implemented league-wide sometime in the 2010-11 season.

Trevor Ariza Haunts Magic in NBA Finals
Trevor Ariza never wanted to be traded by the Orlando Magic, but it was the best thing that ever happened to him.He won an NBA Championship. He blossomed as a player. He will become very rich this summer as a free agent. Life has turned out for the better.

Will Another Coach Ever Win 10 NBA Titles?
(No.)

Jameer Nelson Never Delivered a Spark
Nelson may be remembered – maybe unfairly -- as the symbol of the Magic's failure in the Finals. What started as his finest NBA season – his first All-Star selection – ended with his most disappointing one. After missing four months recovering from that right shoulder injury and surgery, he suddenly reappeared for the NBA Finals, a gamble by Magic coach Stan Van Gundy and general manager Otis Smith that backfired.

'Shaq to Cavs' Has Traction, Resistance
And what would the Cavs get for that price tag? A formerly dominant All-Star center who instantly boosts the financial value of the team and makes the profile of the franchise even brighter. Of course, they'd also get a player that's 37 year old with a history of conditioning issues (and the Cavs don't have the Suns' renowned trainers) and a penchant for alienating players by attaching blame. For the Cavs, it could be the move that puts them into championship gold, or the unraveling of a contender. It can happen just that fast. Ask Kerr.

Bryant, Jackson Add to Championship Legacies; Are More Rings Ahead?  - The Baseline

No Shaq, no problem for Kobe and Lakers

Pay homage to Jackson, greatest coach of all time - FOX Sports on MSN
The Los Angeles Lakers' Phil Jackson has some polarizing traits, from that grin that drifts into a smirk to his tendency to tiptoe between erudite and seemingly arrogant. But now that he was won 10 championships, NBA fans need to embrace the idea that he's the greatest coach in basketball history. There is no discussion, no debate.

We'll update throughout the day.  Please send any Championship worthy links to wondahbap@aol.com.  Please no bobblehead articles unless they are very good.  Meaning No Simers, No Mariotti, No Plaschke, No Paige, No Bayliss, No Keown.  I think you get it.