There's been a big to-do about the drama in Game 2 of the Lakers-Rockets second round series, resulting in Ron Artest's ejection from the game. For the record, I think Artest has only himself to blame for that ejection, because everyone in the building knew that if he kept going at it after the first technical, he would be ejected — especially considering all that had already transpired. He did, and he was.

In Game 3, he was ejected again — his second ejection in as many games — this time for a play on the ball that was deemed a Flagrant II foul. I couldn't disagree more. 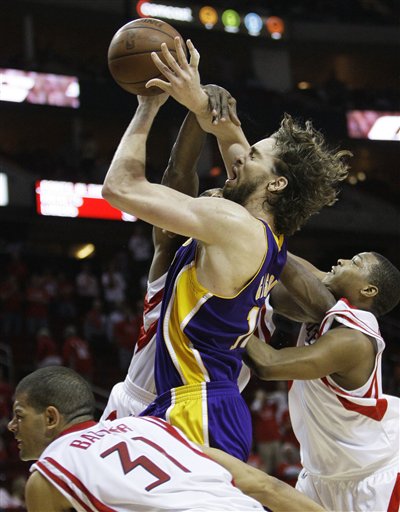 Interestingly, the outrage over the play that led to Artest's Game 2 ejection seems to have been confined to the fans. Players on both sides saw it as a non-issue, refusing to label each other dirty, and instead saying that it was just good, hard playoff basketball, and par for the course. J.A. Adande highlighted this fact well in a column yesterday, which I highly recommend you read.

Perhaps we should all take a cue from our teams, and adopt their attitude towards the game. Rather than throwing a hissy fit over this or that play, consider that if the players themselves don't see anything particularly wrong with it, it's probably not worth getting upset over.

All of that leads us to tonight. It's the end of the fourth quarter, and the game is already essentially decided. But Ron Artest is making desperation heaves, and the Lakers aren't foolish enough to pretend the final 47 seconds on the clock will play out uneventfully. Pau Gasol received the inbounds pass and runs the court like a point guard, going straight to the hoop. Ron Artest meets him there, collides with him, and Pau Gasol takes a hard fall.

The referees reviewed the play and called a Flagrant II foul on Ron Artest, resulting in automatic ejection and the possibility of suspension.

Now, I'm a big fan of tough, hard basketball. I don't like all the sissy rules we have now (yeah, I said it). I hate when players or fans complain about the hard fouls. As we say here at SS&R, grow a pair of 80s.

Over the course of the year, the Lakers have been on the delivering end of a few hard fouls, some of which didn't end well for the recipient of the foul. Some complained about Bynum's hard foul on LeBron James. Many complained about Bynum's hard foul on Gerald Wallace, which resulted in injury for Wallace. Even more complained (read: screamed bloody murder) about Trevor Ariza's block attempt on Rudy Fernandez, resulting in a hard landing and injury for Fernandez. In all of these circumstances, I felt like the foul was just part of basketball, with unfortunate results.

My mantra has been that you cannot judge the result; you must judge the play that led to that result. All of these plays were of the sort that happen on a near-daily basis in the NBA.

Throughout, those who were convinced that I was nothing more than a Lakers fan, seeing the world through Purple and Gold glasses, insisted vehemently that I would be singing a very different tune if the player on the receiving end of the foul were Kobe or Gasol, or any other Laker, for that matter.

So let me be the first to say that I completely disagree with the referees on this call. It was not a Flagrant foul. It certainly was not a Flagrant II. It did not warrant ejection, and it sure as hell should not result in any suspension.

Kobe Bryant, quoted in the AP report, put it best: "I don't think that was a flagrant, maybe a flagrant one," Bryant said of Artest's ejection. "That rule is so all over the place, it's hard to judge. I'm an '80s baby, so that's just two shots and let's go."

Artest was going for the block. He collided with Gasol — as happens all the time in the NBA. Gasol took a hard foul, but that happens. I'm glad he wasn't injured, but even if he was, the play that led to his fall warranted two things: A first free throw, and a second. Nothing more.

Though it will provide little consolation for Rockets fans, I hope the league will correct this mistake in review, revoking the Flagrant II foul entirely (not downgrading it; revoking it). And if by some insane absurdity they decide to suspend Artest for a game, I'll be joining Rockets fans in anger.