Here are your early Laker Links:

Order was restored last night and our Lakers did what we're used to seeing.  We came out on fire,  let up in the 2nd quarter and gave up a lead, came out hot again in the 3rd, and put the game away in the 4th.  But there was something else that happened that we've seen this year; The Lakers won another chippy and/or intense game.  Our own FryringDutchman recap's the game.

Of course, all the talk will revolve around all of the technical fouls, Fish's flagrant foul on Luis Scola, Kobe's elbow , and the return of Ron Ron. (By the way, Artest was spectacular last night.  He made shot after shot and kept his team there until Crazy Pills showed up.  Who knew he might actually be able to carry a team?)

Was it a little dirty?  Probably.

Will he be suspended?  Most likely. 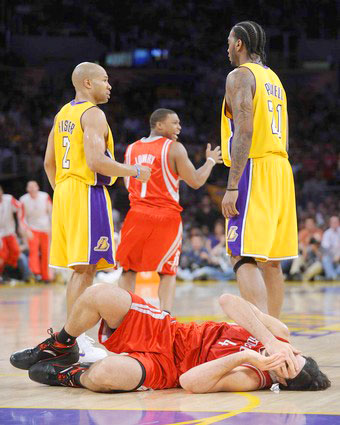 We talked tough.  We played tough;  "That giant smack you heard Wednesday from the corner of 11th and Figueroa?  The Lakers, punching back."  We asked for it, we got it.

Sometimes statements are made with fouls like that, and it was a statement made by the Lakers that the Rockets (nor any other team) will not beat us by trying to be "tougher," or "physical."  Was this any different from Chris Webber's flattening of John Stockton on a screen in 1999?  A screen he was praised for, to let the Jazz know they were ready to scrap.  Well, the Lakers are ready.  Especially after coming out flat in Game 1.

Houston fans claim they are the tougher team.  But when the Lakers get tough, they cry foul.  Which one is it?  Are you as tough as you think?  If you are, then you have nothing to worry about.  Right?  It should work in your favor.  Here's timbo's "View from Houston"  This fight is far from over.  See you in Houston.

Is it a "newfound" toughness?  I think inconsistent is a better word.

Ball Don't Lie's Kelly Dwyer has some valid points about the game.  "I've just seen the Triangle in too many games to think that the Lakers were "on the right track." They weren't. Kobe was on the right track, nailing impossible shot after impossible shot......The soap opera shoves and whining, I've little interest in. Luis Scola may have flopped a bit, but Derek Fisher knew what he was doing. Get Fisher out of there, after that. Same with Artest, who can dish it but can't take it. Take a seat."

Lamar gets the starting gig again, then walks to work.