As a human being living on this planet, you know the story by now. It's the fourth quarter of Game 2 between the Rockets and Lakers, and the Lakers have a 10-point lead. Kobe Bryant and Ron Artest are vying for position under the basket, anticipating a rebound off a Houston miss.

That's when Kobe elbows Ron Ron in the throat, who first complains demonstratively to the referee, and then makes a beeline for Kobe Bryant. He gets in Bryant's face, who refuses to engage Artest, and Ron receives a technical foul. He keeps going, gets a second, and is tossed from the game.

Bryant elbowed Artest in the throat, and as a result, Artest was ejected. Because of the nature of the original play, Kobe deserves a suspension. Right?

That's how Ron Artest tells the story, and from the limited footage we have, our minds use his account to fill in the gaps, and we believe that that is what happened. But when we watch the replay, do we really see what's actually happening? Let's have another look.

What Everyone Is Talking About

Let's start with the Kobe Bryant elbow that we're all talking about. The following photo is a still shot of the exact frame where that blow began (the left and right images are the exact same shot; one just has a little something extra): 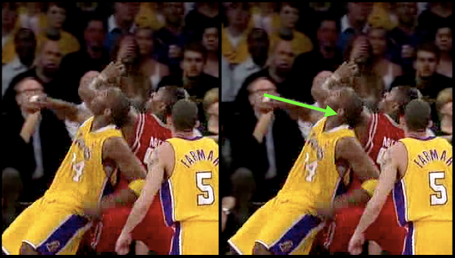 Notice anything? Okay, so it should be pretty obvious, what with the green arrow and all. The green arrow traces the angle of Kobe's arm, and what you should notice is that at the moment Kobe's el-blow began, it was aimed directly at Ron Artest's... chest. Interesting, no? But wait, we're not done.

As Kobe connected with the elbow, the blow created some separation between his torso and Artest's. In that space, we can see Kobe's arm. These next two images are ever-so-slightly different from each other. They are a frame apart, simply so that we have a better view of where Kobe's arm actually is. 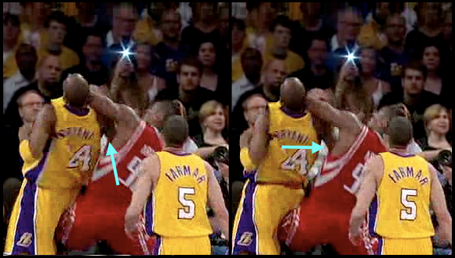 The blue arrows, as you can see for yourself, point to Kobe's arm.

Now, admittedly, this is not the greatest camera angle. It's possible that the league has additional footage, and that a better angle shows different results. But until we see that footage, a detailed, frame-by-frame observation of the footage we have does not support Artest's claim that Bryant elbowed him in the throat.

What No One is Talking About

What's of particular interest to me, which no one is saying much about, is what transpired prior to, and at the same time as, Kobe's elbow to Ron Artest's chest. Observe: 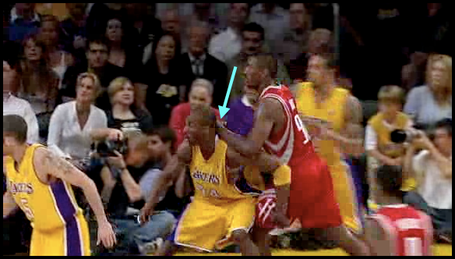 See where the blue arrow is pointing now? That's Artest's arm, planted on Bryant's neck. From here, he's going to shove Kobe with both the arm and the lower body, pushing him toward the basket by the neck and head. 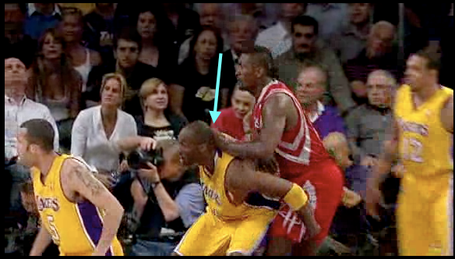 That's Ron Ron's hand on Kobe's neck and head, and he's got Kobe nearly bent in half. Last time I checked, this was not allowed. 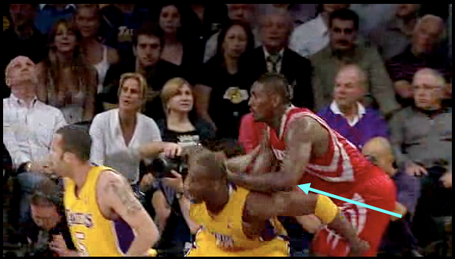 Now Artest has his hand on Kobe's neck and head, and his entire forearm on top of his shoulders, and he's leaning his weight onto Kobe — who is struggling to stay vertical. Thanks to a camera flash, the next shot makes this particularly clear. 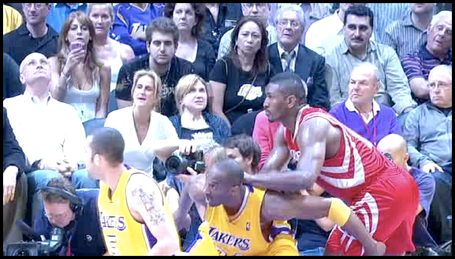 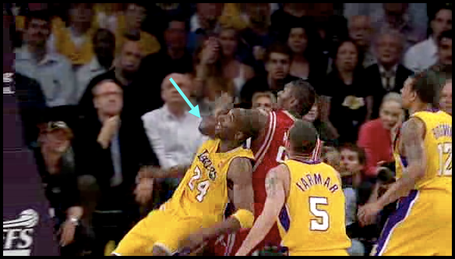 Kobe regains his balance a bit, tries to straighten up, but Ron still has his arm on Kobe's neck, trying to shove him downwards. Notice that Ron's body is turning towards the basket. A couple more frames ahead, we have this: 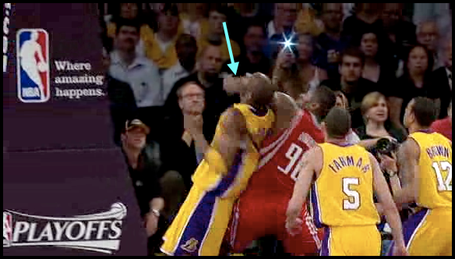 It's hard to see, because of the resolution of the video in this particular frame, but the brown blur that the blue arrow above is pointing to is Artest's hand and forearm. Notice how Kobe's head has snapped back? That's because as Artest turned left, he brought his arm around (remember, it was still on top of Kobe's shoulder), and either the elbow or the upper arm connected with Kobe's head. 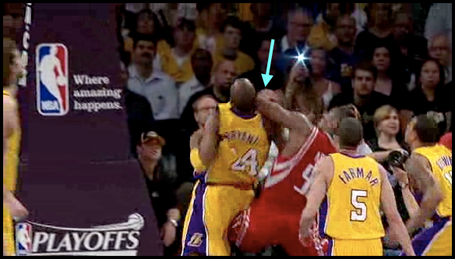 The blue arrow is pointing to Artest's forearm, still resting atop Kobe's shoulder. It is bent at a right angle with his upper arm, possibly meaning that when he hit Kobe, it was with a bent elbow. Notice that Kobe's head is now fully snapped back, presumably from the force of the blow.

Kind of changes things, doesn't it? During this entire possession, Ron Artest has been making illegal physical contact with Kobe's head, and using his arms in ways that are not allowed. Is Kobe's elbow to Ron's chest any worse than Ron's hand and forearm on the neck and head — let alone his own blow to Kobe's head? And considering Artest's position throughout this possession — that is, on top of Kobe — is it any surprise that he was called for the foul?

Is Kobe blameless? No. He threw an elbow at Artest. But given the circumstances, and the way Artest was illegally manhandling Kobe with his hands and arms, I have a hard time seeing how that is worse than a shove from one big man to another after getting tangled up underneath the hoop.

And while both players took a blow from the other (Kobe arguably took quite a bit more physical abuse from Ron Ron than he doled out), when the play was over it was Artest who lost his head, while Bryant kept his cool. Artest would have done well to simply walk away — after the way he manhandled Kobe by the neck and head with his hands and arms, I have a hard time feeling any sympathy for him. In fact, it's downright hypocritical of him to pitch such a hissy fit, after what he had been doing to Kobe just moments earlier.

Add to that the fact that off-handed clearouts and forearm shoves in the back, largely uncalled, are an almost constant part of his game, and I really don't see where Artest gets off, suddenly getting upset at something like this.

As for Kobe, it's hard to say what will happen. If the league has footage from the other side of the entanglement that clearly shows Kobe's elbow connecting with Artest's throat or head, then he should be suspended one game. But if no such footage exists, then they need to go with the best interpretation of the limited footage they have, which seems to show Kobe elbowing Artest in the chest. Without contact above the shoulders, no suspension would be warranted, and the league would likely assess a flagrant foul and fine Kobe for the elbow to the body.

UPDATE: Over at TrueHoop, Henry Abbott has additional footage, from the other side of the play. And guess what? It essentially reinforces what I've shown here. Take a look:

Sure enough, Kobe appears to elbow Ron in the chest. There is no indication that the elbow hit Ron in the face. Now, the question we should have been asking all along: Is anyone really surprised that Artest got hit in the chest, and tried to convince the referees that he got hit in the throat? Not because he's Crazy Ron — just because that is what NBA players do. If they think the refs saw something, but didn't have a good angle on it, they'll act as though it was worse than it actually was, hoping to draw a harsher call on their opponent. That is what Artest did here.

Henry sees Artest's head snap back, and wonders if Kobe also got a piece of his face. Is it possible that after the fact, there may have been incidental contact to the face? The video doesn't show it at all, but again, it's not the most definitive video, so I can't say it isn't possible.

But what seems more likely to me is that Artest looked straight up just before Kobe's elbow connected with his chest — of his own will, and completely unrelated to the elbow. Why would he do that? The shot had just bounced off the rim, and both he and Bryant were tracking the ball and fighting for the rebound.

In any case, it's clear that the elbow connected with Ron's chest. Any contact of Kobe's arm to Ron's head is incidental, and certainly no worse than the arm and/or elbow Ron delievered to Kobe's head at around the same time.

The two suffered essentially the same treatment from each other — and it's not the first time they've done this to each other, either — but it was Artest's decision to charge at Kobe, and it was his decision not to stop when the refs pulled him off. That is what got him ejected from the game.

From the video we have, the only reasonable conclusion we can come to is that Kobe threw an elbow to Artest's chest, and there was all sorts of other very physical contact, from both players, on the play. And given the circumstances, I don't see much difference between Kobe's elbow to the body of Artest, who is hanging all over him, and a shove in the back from one center to another, who also feels there has been too much contact under the hoop. Neither are suspension-worthy offenses, but both are likely to result in fines. That is what should happen here.