Why the Houston Rockets are tougher than you think they are...

Share All sharing options for: Why the Houston Rockets are tougher than you think they are...

After 6 straight series losses in the First Round of the NBA Playoffs, the Houston Rockets have moved on to the Conference Semis, their first appearance since the 1996-97 season. Despite being without the services of their 11 year pro volume-shooting money-man, Tracy McGrady (15.6 ppg in 35 games this year), the Rockets have managed to gel as a unit around two of the things that coaches love best — defensive pressure and unselfish team play.

Their dispatch of the highly touted Portland Trailblazers in a 6 game series revealed a strength and depth which might not be apparent at first blush to NBA fans who see Houston play one or two or a few times a year.

Even the casual fan of the Houston Rockets knows that their big man, 6th year Center Yao Ming, is truly a BIG man. At 7'6" and listed conservatively at 310 pounds, Yao dwarfs the other pivotmen of the league like no other, forcing teams to front him to deny the entry pass and to immediately double-team upon receipt of the ball.

Portland paid the price in Game 1 of their series this year, when their defensive standout, 7'0" Center Joel Przybilla, attempted to play behind Yao in man-to-man coverage, only to be rewarded by Yao's 9-for-9 shooting and 24 points by halftime. The first half of Game 1 proved decisive in the series; Portland never recovered. The Lakers will have to front-and-double Yao or they, too, will pay a bitter price.

Unlike the NBA's other Immovable Object of the Paint, Shaquille O'Neal, employing an intentional foul strategy against Yao whenever he receives the ball is not only fruitless, it is downright suicidal. Yao shot an astounding 92.0% from the charity stripe in Round 1, missing just 2 shots — a performance not greatly dissimilar from his seasonal average of 86.6% from the line. 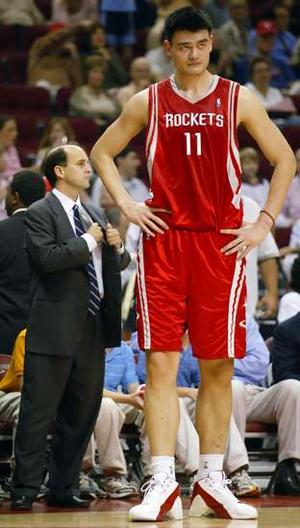 The fronting strategy, while effective, is extremely foul intensive. Andrew Bynum will likely be neutralized by foul trouble, trying to fight around the Chinese mountain for fronting position. Jackson will likely be forced to call upon low post rucker DJ Mbenga in this round when Bynum goes down, or else face a greatly reduced effectiveness of Pau Gasol.

After Houston lost its backup Center, Dikembe Mutombo, to a career-ending knee injury in the Portland series, Yao proved himself capable of surviving stints of over 40 minutes a game. Yao manages to stay on the floor due in large measure to the fact that his low post defense is very passive — he stands still with hands straight up in the air more often than not, and he was only once in serious foul trouble in the 6 game Portland series. Yao is simply not an easy man to foul out, averaging 3.3 personal fouls per game over his career. He can be beat up and down the floor by running, something that the Lakers will need to do. Whatever offensive strategy they choose to employ, it is clear that Phil Jackson's defensive planning must begin with Yao.

Unfortunately, heavy double-teams of Yao often frees up the Houston Power Forward. The big horse here is 6'9" Argentine Luis Scola, a terrific second year player with tragic vujacichian hair. Scola handily outplayed the Blazers' rising star, LaMarcus Aldridge, for much of the Portland series, mixing defensive tenacity, excellent rebounding technique, and a surprisingly nice touch within 20 feet. Scola averaged 16.2 points and 6.7 rebounds in 33 minutes during Round 1, slightly better on the offensive end than his 12.7 point scoring average during the regular season. 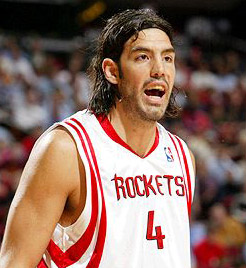 If the Lakers' PF helps out on Yao, Scola has a propensity to come free, and the pass-first, worry-about-stats-never Rockets are ready and able to find the open man... Scola is money if he gets midrange open looks. The Lakers must figure out how to keep him covered while getting the ball out of Yao's hands low.

Scola's backup at the 4 is 6'9" Second Year player Carl Landry, a serviceable big out of Purdue who averaged 4.8 points and 3 boards in 15.5 minutes during the Portland series. Landry is relatively older and more experienced than many of his peers of the 2007 draft class, having redshirted and played 4 full years in the NCAA. As with Scola, Landry is a very sound rebounder, using excellent technique, and is an excellent free throw shooter, averaging over 81% during the regular year.

Coach Rick Adelman has tended to rely more heavily on starter Scola and less heavily upon backup Landry in the post season, compared to his rotation during the regular year. Scola is definitely the guy to plan on stopping, but Landry can rebound and put the ball in the hoop as well and the drop-off between starter and backup is comparatively minimal.

The Rockets' starting Small Forward is an intelligent defensive specialist, Shane Battier — one of the top perimeter defenders in the league. Battier is an effective and consistent 3 point shooter, averaging over 38% in the Portland series, during the regular season, and throughout his 8 year career alike.

Battier is also an outstanding, hustling weak side rebounder, pulling down 6 boards per game in an average of just over 39 minutes during Round 1. He averaged over 40 minutes per game in the last 3 games of the Portland tilt, emphasizing the premium that Coach Adelman places on perimeter defense in the Houston scheme. When Ron Artest is on the bench, look for Battier to go man-on-man with Kobe Bryant. When both Artest and Battier are in the game at the same time, don't look for Trevor Ariza to do much.

Battier is not an explosive offensive player, but he has averaged 10.0 points per game over the course of his career and 8.5 in the Portland series. If he is abandoned in the corner attempting to double up in the paint, he has the skills to make the Lakers pay the price.

While Ron Artest is the de facto backup at the 3, the former Kentucky Wildcat Chuck Hayes, a 6'6" player finishing up his 4th season, does see some limited action. He did not score in over 30 minutes of the Portland series and it is doubtful whether Phil Jackson is losing much sleep over the prospect of Chuck Hayes going off on him.

One guy that CAN go off is muscular (muscle-headed?) swingman Ron Artest. You know him and you love him (if you can appreciate great perimeter defense) or hate him (share your beer with him nicely, please!), depending upon whether you love him or hate him. The dude may be a nutter-butter, but when he decides to get to the rack, he gets to the rack — much in the vein of LeBron James. 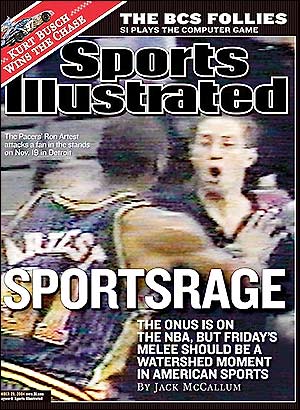 The book on Ron was "let him shoot — he'll help you win with his ball-hogging lousy misses." While there is certain immutable truth to that strategy, the Portland Trailblazers learned to their chagrin in Game 6 that the man who can singlehandedly clank away a game for the Rockets can also put them on his 82" shoulders and carry them over the wall. Artest scored 27 points in 39 minutes of that pressure-packed home game, going 11-for-21 (with 8 of his misses coming from behind the 3-point circle). Moral: keep Ronnie-baby flinging the long ones; watch out when he drives, because he's a linebacker and you're not going to be stopping him.

Artest averaged over 17 points per game during the regular season and must be accounted for in the Lakers' defensive planning. He does have defects, however. In addition to being a very sketchy shooter from beyond the arc, Artest is a rather poor rebounder, given his physique. He'll kill ya by going to the rack with the ball though. Keep him from doing that and life is good. It will be a very tough job for Trevor Ariza on the defensive end, I am guessing.

Artest is naturally a Small Forward, not a Shooting Guard, and he slides to that position effortlessly when the Rockets bring in their scoring spark plug from the bench, the Red Baron, Von Wafer. Wafer, an ex-Laker and ex-Blazer is also ex-sucks. He has gained confidence in his perimeter stroke. During Round 1, Wafer burned the Blazers badly, averaging damned near 10 points in less than 18 minutes of action. Open shots from distance are his specialty, but he is quick enough to get to the rack if you leave him a lane.

If you think Von Wafer is quick, check out Rockets' starting PG, Aaron Brooks. The ex-University of Oregon Duck is like a sports car with an otherworldly hydrostatic transmission that lets him get from 0 to 180 in 3.2 seconds. Phil Jackson will need an extra white board sitting next to his throne with the words STOP THE GOD DAMNED BALL!!! inscribed in black Sharpie... Brooks is a master of taking the rock coast to coast — although he is sometimes out of control doing it.

Brooks was instrumental in sending the Trailblazers deep sea fishing, averaging 15.3 points and 4.3 assists in just over 31 minutes of action. During the regular year he averaged a healthy 11.2 ppg — so look for him to be in double figures every night going against the accelerationally-challenged Derek Fisher. Fisher's mission will be to neutralize Brooks with charge-draws.

Brooks is also capable of getting red hot from distance. When he gets rolling, look out. On the other hand, jumpshooters live by the sword and die by the sword... In Houston's Game 5 loss to Portland, Brooks was just 1-for-8 from behind the arc — not at all helpful to the Rockets' cause.

Backup P G is former Memphis Grizzly Kyle Lowry, a player who was extremely ineffective during the Portland series. Brooks might kill ya, Lowry will not.

That's the core of the Rockets. Remember, if you will, that Coach Rick Adelman is an extremely sharp veteran tactician, capable of making great defensive adjustments on the fly. The Rockets hang their hat on team defense — Battier and Artest are both on the short list of the NBA's top defenders and Scola is a greatly underrated player with tenacity and hustle.

The Rockets are a team with back-to-back NBA Championships in their history (1993-94 & 1994-95)  and made the Western Conference finals two years after that, so despite their recent difficulties in advancing beyond Round 1, their fans have a winning tradition and will bring raucous intensity to every game held at Toyota Center in Houston. The Lakers must take advantage of their home court advantage; as the Blazers learned, coming out flat with a defective defensive strategy can almost instantly rob a team of home court advantage and put them on their heels for an entire series.

Forget the fact that the Lakers managed to sweep Houston during the regular season. This is a matchup of Los Angeles (4-1) against Houston (4-2). The Rockets play together at a level better than the sum of their parts. While I am among those that think the Lakers will emerge triumphant, I am not for one minute thinking that this will be an easy exercise, given the Rockets' big mismatches at the Center and Point Guard positions. The Lakers will need to bring the proverbial A-game each and every night, or Houston will be sneaking up on them with a sensational upset that will bring an end to the magnificent season of the purple and gold.