I'm sorry I'm late with the links today, but I couldn't help myself regarding the officiating  of these Playoffs.  So, I went on an unexpected tangent after the jump.

There isn't too much to link to today, so if you have any worthy links I missed, feel free to email me, and I will include them.  (wondahbap@aol.com)

Finals road test for the Lakers

Can the Lakers rendezvous in Denver with Mr. Killer Instinct?

Shannon Brown continues to make an impact for Lakers.

With pressure high, Nuggets turn to their cool-headed leader Billups

What does $50,000 buy you?  "A Prius," according to Kobe.  A spineless unidentified Nuggets thinks it bought the Lakers a game.  So?  Reciprocity is all anyone wants.  Agreed?   Lakers, Nuggets in Great Officiating Debate. 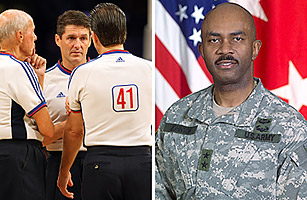 NBA is trying to prove a negative this season, going out of it's way to show there's no conspiracy to get the Lakers/Cavs Finals everyone wants. I don't know.  Instead of reversing every major call, or assessing flagrants when the officials didn't call it that way in the game, how about actually improving officiating?  Not hire former Army generals, who have no officiating experience, as some side show to make it seem like something was done about it.

These playoffs have been marred by the officiating being the topic.

Too many flagrant whistles in NBA Playoffs have players, coaches cyring foul on officials.

Denver's whining means the series is over.

This is from a Time article in October 2008:

"When asked for his reaction to Johnson's hiring, Hue Hollins, a 27-year NBA official who retired in 2003, says, "I passed out. You'd think you'd hire someone who knows something about basketball."

But NBA commissioner David Stern hired Johnson, who retired this spring as the second-highest-ranking engineer in the Army, for his management experience, not his ability to distinguish a charge from a blocking foul. 'I've got some work to do to establish some credibility,' Johnson, 54, admits. 'But let me say something: credibility in this position has nothing to do with my ability to be an expert referee. I believe that in my heart.' Johnson insists that he's used to learning on the fly. 'Throughout my Army career, I've been promoted and moved around a lot, and never had time to master one thing,' says Johnson. 'I've really focused on leading and managing on a strategic level. So I guess you can say I feel comfortable with a broad range of ignorance. But I'm a quick study.'

In particular, Johnson plans to use his math background to spot trends and further improve the league's already sophisticated data analysis and video-feedback systems. 'I've got this chart sitting in front of my desk comparing preseason travels, offensive three-second calls and defensive three-second calls for the past two years,' he says. 'I can sit here and determine if there's a statistically significant difference." If a certain type of violation is being called with more or less frequency, Johnson plans to figure out what's driving the change. His two biggest priorities are lowering the number of technical fouls called in games — during the 2007 playoffs in particular, the refs called techs at an alarming rate, needlessly inserting themselves into the action — and tackling the perception that referees favor certain star players, which the recent report specifies as a real concern. Johnson has encouraged coaches and owners to contact him directly with bias complaints.' "

What, exactly, has changed from the time of that Times article to now?  Nothing.

Instead the problem has grown because of David Stern's patronization of us, the real NBA fans, to placate the ignorant casual fans dumb enough to believe that:

2.  The NBA was really interested in cleaning it up.

3.  That there is actually a conspiracy.

We talk of Home Court Advantage, and home whistles as it's nothing.  We are conditioned to accept it (whether we know it or not).  But you know what?  I've become fine with that, as long as it goes both ways.  Call it tight.  Call it loose.  Just call it the same.  I expect a professional player to work through the calls.  To beat the odds.  That is what separates the amateurs from the real pros.

Are the refs letting an offensive lineman hold?  Learn a new swim move.  Is the umpire giving the pitcher a wide strike zone?  Learn to hit the outsie pitch.  Are the refs letting you get pushed off the block?  Man up.  The ability to adapt is the mark of a true professional.

But I'm tired of debating calls.  It's not fair to us. It cheapens the game and ruins our satisfaction.

You have created this problem and let it fester.  So, instead of enjoying our teams win, we have to defend the effort and argue over who got the calls, we have to whine if our team isn't getting them,  We are worried about star calls, and the NBA's vested interests in what teams make the Finals, instead of good basketball.  Valid or not.

If the Finals happen to end up Lakers vs. Cavs, it's because they were the best two teams all year, not because the powers that be wanted it this way.  If it doesn't happen that way, then don't make the fans of those teams feel that the NBA went out of it's way to not give so-called star calls.

Cater to the real NBA fan, and stop the rescinded calls, the day after flagrant assessments, and the image-related circus side show hirings.  We might not all be as smart as you, but we aren't stupid either.  Stop treating us like we are.  If you do, the casual fans will fall in line.  We shape the perception of the NBA, not them, and obviously not you.