Why the Denver Nuggets Are Tougher Than You Think They Are

Share All sharing options for: Why the Denver Nuggets Are Tougher Than You Think They Are

[Ed. Note:  After a semi-final series that gives timbo plenty of excuse to say, "I told you so!" he's here to take the high road. Just kidding! With pop culture wit that would make Hardwood Paroxysm proud, that's exactly what he's here to do. And of course, to warn us about the next round. Should we listen to the "silly sod"?

In fairness, I did give a more reserved prediction (Lakers in 6) than many who thought L.A. would easily overcome Houston in 5 games.]

There were many eyes rolled when I prattled on a couple weeks ago about the secret nastiness and difficulty of the Houston Rockets as a 2nd Round opponent for the boys in Purple. I recall my exact words: 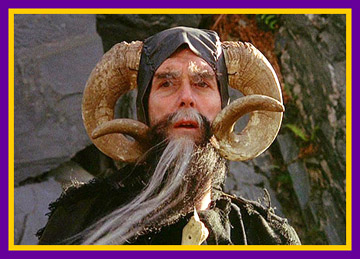 TIMBO THE ENCHANTER: Follow!!! But follow only if ye be men of valor, for the entrance to this cave is guarded by a creature so foul, so cruel that no man yet has fought with it and lived! Bones of four fifty men lie strewn about its lair... So, brave Laker fans, if you do doubt your COURAGE or your STRENGTH — come no further, for death awaits you all with nasty, big, pointy teeth...

I was considered an eccentric buffoon, but we proceeded to the dreaded Semi-Final series nonetheless... 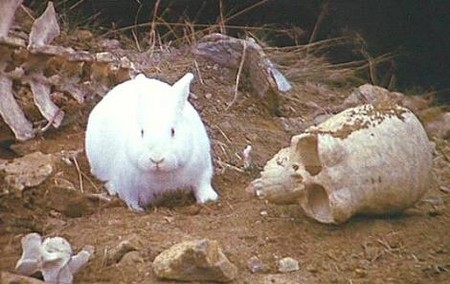 TIMBO THE ENCHANTER: There he is!
KING JOSH OF THE LAND OF SS&R: Where?
TIMBO: There!
KING JOSH: What, behind the rabbit?
TIMBO: It IS the rabbit!!!
KING JOSH: You silly sod! You got us all worked up!
TIMBO: Well, that's no ordinary rabbit. That's the most foul, cruel, and bad-tempered rodent you ever set eyes on...
FIRST LAKER FAN: You tit! I soiled my armor I was so scared!
TIMBO: Look, that rabbit's got a vicious streak a mile wide — it's a killer!
SECOND LAKER FAN: Get stuffed!
TIMBO: It'll do you a trick, mate!
SECOND LAKER FAN: Oh, yeah?
FIRST LAKER FAN: You mangy Scotch git!
TIMBO: I'm warning you!
FIRST LAKER FAN: What's he do, nibble your bum?
TIMBO: He's got huge, sharp... He can leap about... LOOK AT THE BONES!!!
KING JOSH: Go on... Chop his head off!
THIRD LAKER FAN: Right! Silly little bleeder. Rocket stew comin' right up!
TIMBO: Look!

[Game 1 happens... Innocuous Houston rabbit leaps 15 feet in a single bound and instantly slices of the head of the unfortunate THIRD LAKER FAN...]

KING JOSH: JESUS CHRIST!!!
TIMBO THE ENCHANTER: I warned you!
FIRST LAKER FAN: I peed again!
TIMBO: I warned you! I warned you! But did you listen to me? Oh, NOOOOOOOOO, you knew it all, didn't you?!? Oh, it's just a harmless little bunny, isn't it?!?  Well, it's always the same, I always...
KING JOSH: OH SHUT UP!!!

Well, Houston proved to be a 7 game nail biter. Like a $50 Craig's List massage, it had a happy ending, but beating Denver is going to be a significantly tougher task, I shit you not...

Now that I have your attention, please click ahead if you dare to hear the various reasons why I am convinced this is so...

It will be tougher to beat the Denver Nuggets because they are a better team than the Houston Rockets were...

Still don't believe me? Let's look at their roster, position by position...

If I were really clever, I would make a terrific bilingual pun about the cajones (cajone?) of the Nuggets' big man, Nené, relating that the the killer conejo of Python lore... Never mind, that's too much work. Let's just say this: Nené is big. Nené is quick. Nené is good. 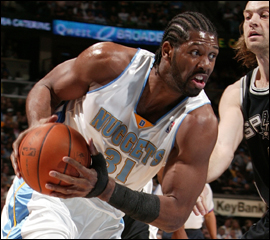 How big is he? We are not talking about an undersized third string Power Forward playing out of position here, let's just say... The Basher from Brazil is listed at 6'11", 250 pounds, and he averaged an impressive 14.6 points per game with nearly 8 rebounds in an average of 32.5 minutes of play this past season. In the Conference Semis against the Dallas Mavericks (who the Nuggets handily dispatched), his top scoring effort was 17 points in the decisive Game 5, playing against an overweight and under-good Erick Dampier.

While he is not an upper echelon rebounder, Nené is one of the very good (albeit largely unsung) offensive centers of the league. Nené will have the ability and agility to put HFM Andrew Bynum into foul trouble and should be able to overpower Pau Gasol around the hoop on entry passes and putbacks. He will keep Pau occupied on the defensive end.

Nené averages about one block a game and is a reasonably hard post player to foul out, averaging right around 3.5 fouls per game throughout his career; marginally higher in this year's playoffs.

Nené's backup is media darling and circus freak Chris "Birdbrain" Andersen — he of the hair gel, sleeved tattoos, and Hulk Hoganesque poses for the cameras. Out of the league for a while for the use of unspecified non-performance enhancing substances, the pride of Blinn Junior College (Brenham, Texas) looks to me like he has the vacant eyes of a glue huffer — but it's hard to imagine that a guy with this many tattoos didn't have a thing for needle drugs, is it not? 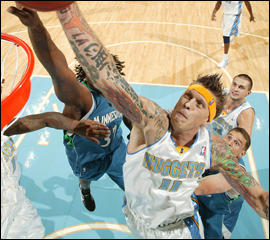 Regardless of whatever mean jokes I make up, Birdbrain's fans and foes can all agree to be very happy for him and us that he'll be making millions of dollars in the NBA as a Free Agent next year rather than $8/hr bagging groceries for grannies at Safeway.

Birdbrain — with his phony pseudo-punk hairstyles, colorful arms, and ridiculous post-rejection Mutomboisms — has somehow established himself in the eyes of the talking heads of telly as one of the league's premiere shot-blockers, averaging 2.5 blocks in just over 20 minutes this year. He does have that one super skill.

Birdbrain's points are almost all scored on putbacks. He is big enough (6'10") and strong enough and agile enough to do this properly. Tweety has been averaging nearly 7 points in 21 minutes in the playoffs — fully sufficient for a backup 5. Even though I can't stand the prefabricated puke, he can play the low post, let there be no mistake.

The Nuggets' starting PF is another freakishly tattooed pug, Kenyon Martin. He's also an ugh with an ugly mug. The 31 year old lists at 6'9" and seems to be already on the downward side of his career, seeing his scoring average drop from a career average of about 14 ppg. to under 12 this year. He is averaging right at 10 points per game in 33 minutes in this year's playoffs. 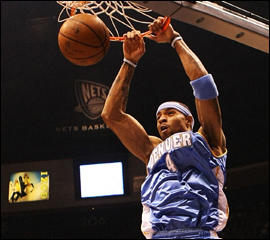 Give him two more years and maybe Joe Dumars will trade Denver Tayshaun Prince for him, eh?

Better known for his ink work than his footwork (good choice on those neck "lips," bucky — you and Starbury should do a card show together), Mark Cuban's penpal only averaged about 6 rebounds per game this year, and is almost a full RPG below that in this year's playoffs.

Martin's backup (outside of the time when Nené and Birdbrain are on the floor together) is Linas Kleiza, a 6'8" shooter. Kleiza averaged 10 points in 17 minutes in the first round against the fading New Orleans Hornets but never found his groove in the second round against Dirk & Co., held to an average of 3 & 2 in 12 minutes.

The key to the Denver Nuggets' offense is their starting Small Forward — Olympian and Superstar Carmelo Anthony. (Anthony also has ugly tattoos — are we noticing a pattern here?) I don't need to spend too many words making the case that this is an exceptional talent. Six-foot-eight and nearly as strong as Lebron, Anthony can take it to the hole or rip out the nets with brilliant jumpshooting — either way.

Anthony has been on fire in the playoffs, upping his season average of 22.8 ppg to 24.0 against the Hornets and an incredible 30.0 against the Mavs (including the controversial He-Fouled-Me/He-Fouled-Me-Not 3-point winner in Game 3). Anthony is shooting 44.7% from behind the arc in the playoffs — read that number and weep, Laker fans.

Trevor Ariza is going to have to play some of the best defense of his life to minimize the damage. Anthony will single-handedly beat the Lakers like Tiger Woods swinging a driver on an Easter egg unless extraordinary attention is paid to him.

Anthony plays nearly 40 minutes a game and coach George Karl tends to load the floor with guards in the rare moments he sits. You will usually see PG Chauncey Billups coming off the bench to end his rest period in the 2nd and 4th Quarters when Melo briefly sits.

It is hard to get terrifically excited about the 2 Guards of the Nuggets. Ignoring them if you are the Lakers, however, would be a tragic mistake. Starter is Dahntay Jones, a 5.5 ppg Dukey in the regular season, upping that output to 7.6 ppg in these playoffs. A thoroughly decent shooter from behind the arc, Jones has averaged a career 36.7% from downtown. Still, he is not the sort of player that will beat you.

A far more dangerous tool in Karl's box is backup J.R. Smith. If you do not keep a hand in his face behind the circle, he will torch, roast, immolate, incinerate, and cremate the Lakers. Smith is a streak shooter par excellence and when he gets a hot hand is capable of single-handedly producing a 10- or 12-point run in a few short minutes. He's also another Ugly Tattoos Guy, for what it's worth... 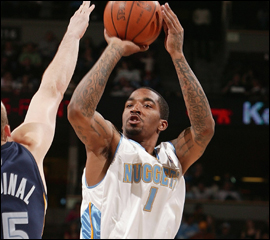 Since he plays with the Nuggets' second unit, it will often not be Kobe's job to stop him, but rather a tall task for... ... ...Operaman.

Yes, him. Are you scared yet?

Smith is averaging 16.3 in these playoffs. And  is shooting 40.7% from 3-Point Land... That is the SECOND UNIT'S Shooting Guard! Are you scared yet?

That's 16.3 points per game BEFORE going off on Operaman.

Now go and change your armor.

But before you do that, repeat after me so that we get this perfectly straight: it is the BACKUP shooting guard for the Nuggets that is the deadly one, not the starter. Do not exhale when the so-called "deep bench" of the Lakers goes up against the factually deep bench of the Nuggets. It is this that is the moment of greatest danger of a fast 10-point swing...

Okay, so I've made the sale that the Nuggets are more formidable than the Rockets, right? Oh, gee, I forgot to mention Chauncey Billups. He's pretty good, too. The smooth, cool, former NBA champion is averaging over 22 points in 37.5 minutes in these playoffs, dishing an average of 7.3 Assists at a cost of only 1.7 Turnovers.

A 3 point bomber and an authentic All Star. An unflappable floor leader. A guy that can get to the rack when he needs to. Drop dead money from the Free Throw line, shooting 95.7% (!) in the playoffs, an increase to his career average of about 90% — among the tops in the NBA, season in, season out.

Guess who is going to have the ball late in games if the Lakers are behind and have to foul? Yikes.

Combo guard Anthony Carter takes care of the rock when Chauncey is on the bench. A 9-year vet out of Hawaii, Carter was a non-factor in the Hornets' series and scored a few points against Dallas. He's usually on the floor a bit over 15 minutes a night and is not the guy that is going to kill you. Trust me, with this team he doesn't need to be.

In Conclusion: The Lakers, unsensational and unfocused in their 5 game win over Utah, and exposed in their 7 game fistfight with the Houston Rockets will need to greedily defend their home court advantage if they want to pull out a 7 game victory. I personally think this one ends up with Denver doing a little jig and advancing to the NBA Finals after Game 6.

If you presume anything like a quick and easy victory for the Lakers over this lot — presume again.