Lakers fans will reminisce about today's Game Seven, to the extent they do so at all, as one might look back on a clogged toilet: an odious chore, conducive to gagging and mild nausea, that one would prefer not to have had to deal with on a pleasant Sunday afternoon. Along the way, if everyone had just paid a little more attention to what they were doing, it would never have come to this, and the plunger could have remained dry under the sink. Congratulations, Pau Gasol - you got to be the plunger.

The Houston Rockets entered this series with only about two-and-a-half ways to score points. One of those ways, and by far the most potent, broke his foot and played only three games. Somehow they MacGyvered their way to two victories sans Yao, but you can only go so far contriving solutions out of duct tape and gum wrappers. Today the Houston "offense" found its natural level, which turns out to be 70 points scored over 48 minutes of play.

For the Lakers, it's on to the Western Conference Finals, starting Tuesday night. Before turning our gaze to the NBA's version of the Final Four, please join me after the jump in taking one last amble through the second-round numbers....

The final 89 possessions of the conference semifinals went a little something like this:

On offense, the Rockets just couldn't do anything right. They went scoreless in their first nine possessions. They couldn't stop turning the ball over, they couldn't get to the free-throw line and they couldn't rebound their own misses. They couldn't make two-point shots, three-point shots or free throws. Their PPP of 0.79 marks only the third time in the 2009 playoffs that a team has failed to hit at least 0.80 points per possession. It's like an NFL team getting held to just a field goal.

The Lakers' offense, at 1.00 PPP for the game, looks good only on a relative basis. Unlike the Rox, they shot the ball like normal human beings and did some fine work on the boards, but they also posted an unsightly turnover rate of 21%, which ties their playoff high. In the third quarter alone, the two teams combined to commit 14 turnovers, including six consecutively at one point.

It's unlikely that footage from this game will ever be endorsed by Fred McGriff for a Tom Emanski basketball drills video.

And since I can't bear to talk about these horrendo offensive numbers anymore, can anyone tell me why ABC is outfitting Doris Burke in ill-fitting sequined tops from Forever 21? 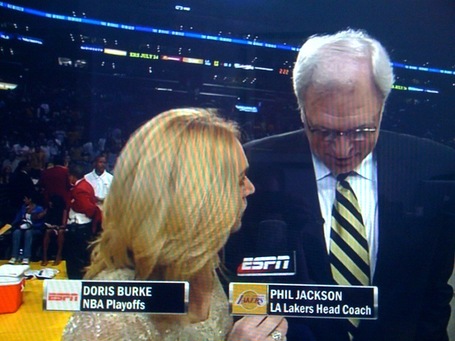 Doris, tell your agent to call the ABC wardrobe people post haste. They're doing you no favors.

Ready for some individual player stat-bombs? Of course you are. After the above photo, I don't blame you:

Here are the final composite numbers for the series:

And the composite numbers for the Lakers across the first two rounds of the playoffs: