Share All sharing options for: Game 6: The Good, The Bad, and The Ugly

A very wise coach once said:

Let's see, there must be something...aha, I got it:

Jordan Farmar-  The kid is back.  It's been said here before, but I was hesitant about saying that after just two good games from him.  After this performance, I am officially shouting it from the rooftops.  He had a huge 13 points last night, none bigger than those two 3s in the first quarter that stopped the bleeding.  I was glad to see him in for the fourth and not Fisher, but I want to see him starting too.  Whoever has won the first quarter has gone on to win the game every time in this series, so it is imperative that we not let Brooks run wild on us for the first 12 minutes.

Trelashau Aribrasoldom-  This is a combination of Pau Gasol, Shannon Brown, Trevor Ariza, and Lamar Odom.  Individually, none played well enough to be called good, but I wouldn't say that they were entirely bad either.  But together, they just manage to make it above the jump thanks to Ariza's active hands, Lamar's rebounding, UPS's energy, and Gasol's something (he was the team's second leading scorer and also grabbed 11 rebounds).

Kobe Bryant-  Yes, he put up 32 of our teams points and yes, he sort of rallied the troops at halftime for that third quarter run, but by trying to come out and set the tone, he ended up killing us in the first quarter.  I don't fault him for trying because this is his M.O. for big road games.  He comes out firing, and 9 nights out of 10 his shots fall when he wants them to.  Unfortunately, tonight was that 10th night, and it took him almost an entire quarter to get his shot to drop.  During this time, the Rockets absolutely blitzed us while we could only muster 15 points.  Once Kobe realized that he wasn't "on," he should have immediately gone inside to Gasol to get him established while letting the game come to him (be Kobe the distributor if you will).  By throwing up brick after brick, he (in my opinion) threw his teammates out of rhythm for much of the game, and by the time he started scoring, it was too little to late.

Andrew Bynum-  He had good spurts of activity, but zero points tonight and no blocked shots just doesn't cut it on the road.  It's one thing to play well at home, but you have to show that kind of determination and fortitude on the road, where the importance of each play is magnified.

Derek Fisher-  If you've watched games 1-5, then you know what I am going to say.  Continually torched by Brooks, not hitting his shots, etc.  I'm not giving up on him, because he brings valuable leadership and experience to the team, but at this point he needs to share these qualities from the bench and let Farmar and UPS do what they do best.

Sasha Vujacic-  I'm not really sure what is wrong with him at this point, but he continues to struggle mightily with his shot, which is all he's really good for.  He'll throws up 5 bricks that don't even draw iron, then make one.  Just when you think that he has found his stroke and is about to get back on track, he'll throw up another 5 bricks.  It pains me that I am happy if he makes more than one 3-pointer in a game.

Luke Walton-  Typical Luke last night.  Passing up open shots, holding the ball, fouling, getting in everyone's way, zero points.  Not sure why he is still playing.  If Ariza needs a break, put Kobe at the 3 spot.  I see no need to rest our players with only two rounds left.

Phil Jackson-  Lately i have had a bone to pick with PJ's decisions, and last night's game had me pulling my hair out, so I'm going to devote the rest of this recap to him.  Please bear with me... 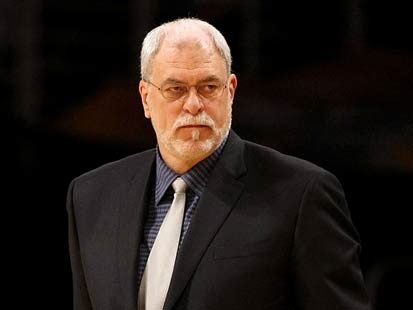 Oh Phil.  So many rings, yet so many missteps from last night.  Let's count them all.

#1  So obviously everyone here at SS&R has been calling for Farmar or Brown to start in place of Fisher, but for whatever reason Phil is reluctant.  I can understand him wanting to stick with guys that he can trust and the know the triangle, but after 5+ games of Fisher's defensive shortcomings, enough is enough.  Any other coach in this league would have sat him a long time ago.

#2  Why is Luke Walton still playing?  This is the playoffs, and 10-man rotations are unacceptable.  Between Ariza, Kobe, and even Vujacic, we have more than enough bodies to fill the small forward position.  For god's sake, getting players rest went out the window after the Utah series ended.  By now I want the best players on the floor for as long as possible, and encyclopedias could be written for Luke's failings as a player on a championship quality team.

#3  I understand the need to get Vujacic some time despite his struggles, because eventually he is going to snap out of it (I hope).  Plus, we will need his shooting, should it ever return.  However, who in their right mind would play Vujacic and Walton together at the same time.  And because they play the 2 and 3 spots, this means that Kobe is not out there with them.  These two played together twice last night (once during garbage time), and both times they were -1.  As the cherry on top of this horrible, horrible sundae, this was the line-up to start the fourth quarter, on the heels of the Lakers cutting the deficit in half during the third: Farmar, Vujacic, Walton, Odom, and Gasol (-1).  Talk about your momentum killers.  There were many reasons that Lakers lost this game, but if they had any hopes of winning it, those hopes ended right here.

For more on the line-ups here is the +/- breakdown courtesy of DexterFishmore:

First of all, 16 different line-ups is absurd.  I know that we were struggling to start the game and PJ was trying to find a good combo, but with so many substitutions I doubt that any one group had enough time to separate itself.  Also, for the most part it seems that the most effective line-ups were ones involving Bryant, Ariza, Odom, and Gasol/Bynum.  The least effective, as you might have guessed, involved a combo of Walton and Vujacic.

#4  Kobe sat on the bench for the first 5 minutes of the fourth quarter while he watched all the Lakers hard work from the third get undone.  Please explain to me why Kobe needs so much rest at this point?  Are we saving him for Denver, because at this point we won't even make it that far.  At the end of the third we had cut the deficit in half, we had momentum, and we had the Rockets scrambling.  So what does PJ do?  He inserts an entirely new line-up and leaves the league's best player on the bench for nearly half the quarter.  I'm not exactly sure what playing to lose is, but I think that this might qualify.  By the time Kobe checked back in, momentum was on the Rockets side again and the game was once again getting out of reach.

#5  Lastly, there is the matter of substituting at the guard spots.  If you take a look at the gameflow from Popcornmachine.net, you will see that other than Kobe, none of the guards (Fisher, Farmar, Brown, Vujacic) really received extended periods of playing time until garbage time in the fourth quarter.  I think that this is disrupting our offensive and defensive flow.  Just when it seems like someone is playing really well (in this case Farmar or Brown) it feels like Jackson gives them the hook soon after.

I don't think that we should fire Phil Jackson.  I think that he is a great coach in the sense that he can manage big egos (we certainly have on of those), and he brings a wonderful system in the form of the triangle that is perfect for the Lakers (although we can really thank Tex Winter for that).  Where I think he is lacking is in a strategist role.  For some reason he seems to not be able to adjust very well to different opponents and match-ups.  I'm not sure if it has always been like this (I'm to young to remember the Bulls era well), or whether the game is just passing him by.  I understand the need for consistency, but there also needs to be flexibility, and so far the only spot he has considered changing has been down low with Odom and Bynum.  I would like to see more in-game responsibilities handed over to Kurt Rambis or Brian Shaw (sorry I know that I am missing an assistant), and let Phil worry about the refs and the player development.

Looking ahead, I sure hope that we win on Sunday, otherwise there will be a lot of angry people in Lakerville come next week, and this team will go down as one of the most disappointing in Lakers' history.  I wish I knew what to expect, but I don't, so I guess all I can do is hope for the best and trust in Kobe's abilities to lead this team.