Share All sharing options for: Lamar Odom, With Range

From the moment, last February, that the Lakers acquired Pau Gasol, one question dominated the conversation for the Lakers: Can Andrew Bynum and Pau Gasol play well together? For my part, I never expected any trouble on the front line. As I wrote before the 2008-09 season started:

Picture the two of them as concentric circles. They don’t conflict with each other; they complement each other. Bynum does what Gasol hates doing: bodying up to the bigs and playing with his back to the basket. Gasol, then, is freed up to work from the elbows, playing the short- to mid-range game with hook shots from either hand and soft jumpers from inside the free throw line. Bynum will be a better and more physical defender under the basket, while Gasol’s length will bother opposing power forwards.

As I saw it, Lamar Odom was the real problem. With only one or the other of Gasol and Bynum in the lineup, Odom played at the power forward position, and did so fairly well. But with both in the lineup, Odom would be pushed to the small forward spot — a position I didn't think he would excel in, and one in which he would hurt the Lakers.

My primary reason for being against Lamar Odom at the small forward position was his lack of range. As I wrote at the beginning of the season:

The Triangle Offense needs shooters to space the floor, and the lane is going to be very busy with Gasol and Bynum sharing space and Bryant and Ariza slashing to the basket. But Odom is not a long range shooter; in fact, the period during which he showed major improvement last just happens to coincide with the point at which he virtually stopped attempting three-point shots altogether.

So if Odom is not a shooter, how can he expect to have success at one of the wing positions, which in the Triangle Offense almost requires one to be a good shooter? My fear is that he won’t. He’ll struggle with his jumpshot, he won’t have enough room to get closer to the basket, and he’ll be stuck on the outside, unable to dominate in rebounding as he did for much of last year. I get that Odom is a selfish player who would actually enjoy not needing to shoot as much, but the Lakers need their wing players to be viable long distance threats. Even if they don’t take many shots, they have to keep the defense honest. Odom won’t do that. Defenses will play off him, taking away his drive and clogging up the rest of the floor.

The Triangle Offense needs shooters. It spaces the floor, keeps the defense honest, and allows the offense to run as it should. This is even more true with several inside threats on the floor. It's no coincidence that sharp shooters like Derek Fisher and Robert Horry have thrived in the system, both in the past and present. 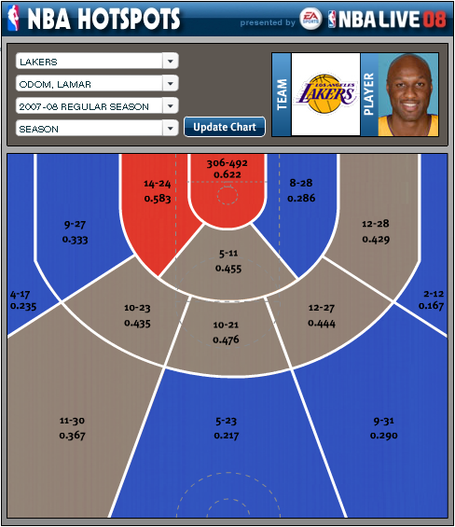 As you can see, Odom shot poorly from virtually every spot behind the three-point arc. He also wasn't much better on jumpshots inside the arc. On long two-pointers, he was poor to average, at best. In fact, the only part of the floor from which he shot well was at the basket, and on close shots to the left.

In short, if Odom wasn't going left and getting to the basket, he wasn't making it.

That appears to have changed. Have a look at his 2008-09 regular season Hot Spots chart: 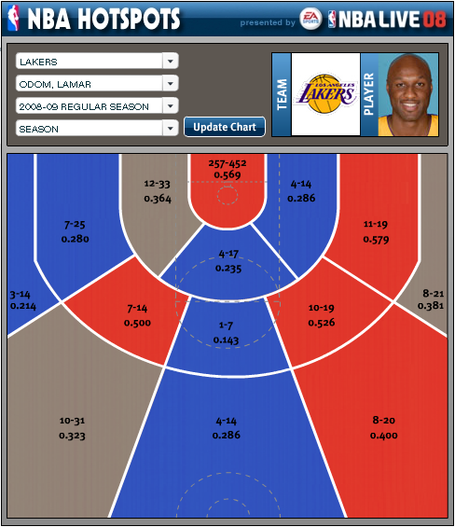 The first thing you should notice is a lot more red, over the entire court. One of those red zones is even beyond the 3-point arc. He's still shooting poorly from certain parts of the floor, but if you use Hot Spots very much, you'll find that this is the case with the vast majority of players. Overall, he's shooting over .500 in three different long-range 2-point zones — typically considered the toughest shots on the court.

From 3-point range, he's gone from four blue zones to two. From three out of five 3-point zones, he's shooting average or better.

On the season, Odom is shooting 32 percent from beyond the arc — no 3-point speciaist, to be sure, but solidly average and a large improvement over last season. Since the All-Star Break, he's shooting .333, and in April, he's shooting a very respectable .357.

While Hot Spots don't give us many options for viewing more recent performance — we can't, for example, look at the last 25 games, or the second half of the season — we can look at the last 10 and the last five games.

Lamar Odom over the last 10 games: 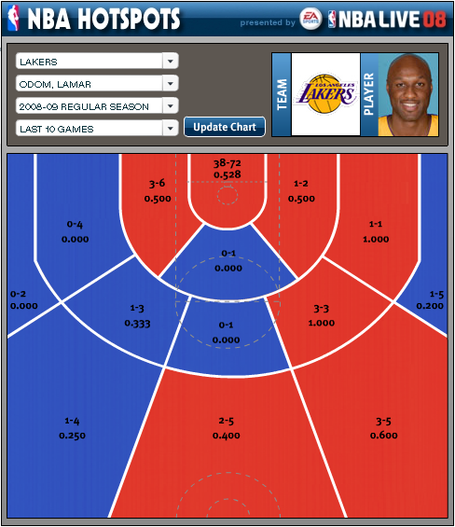 Ironically, Odom has been particularly strong from the right side of the court. He's got a number of weak spots and zero average zones, but seven out of 14 zones on the court are red over the last 10 games.

His Hot Spots over the last five games: 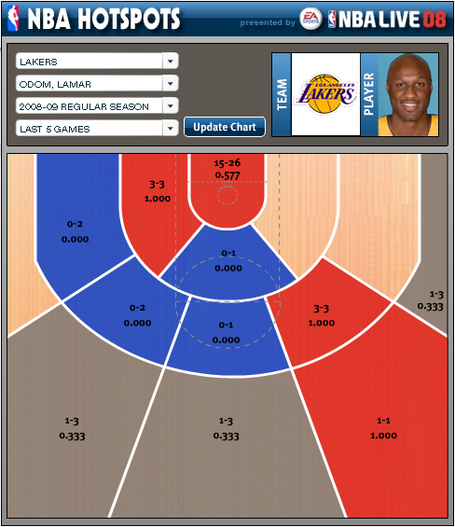 In the last five games, he's continued his solid shooting. He's completely avoided certain areas of the floor, but he's only got four blue zones on the entire floor. Meanwhile, he's still shooting average or above from seven offensive zones. Best of all, he doesn't have a single blue zone from 3-point range in the last five games.

Overall, it's clear that Lamar Odom's shooting has improved significantly across the entire court, and he's performing particularly well of late. Is it enough to make him an effective small forward in the Triangle offense? Perhaps, indeed. And if Phil chooses to use him in that role, he'll have the opportunity to provide the rebounding, help defense, and defensive and offensive versatility that he brings to the table.

Let's hope this trend continues, and Lamar Odom becomes a bona fide long distance threat. In the meantime, he may just be good enough to play at the 3 spot without significantly hurting the team on offense, providing the Lakers with versatility, as well as strength and size, on both ends of the court.