Share All sharing options for: Back-to-Back Preview: Suns and Warriors

It's time for the Los Angeles Lakers to get their cardio on. Tonight and tomorrow they play a back-to-back set against two of the runningest, gunningest teams in the West. First up are our old friends the Phoenix Suns. You might remember them from such beatdowns as the two times the Lakers have already played them this year. Tomorrow night come the Golden State Warriors, who stand one Vinny Del Negro firing away from being able to say they have the worst coach in the NBA.

With consecutive track meets on the schedule, you'd hope the Lakers would be at full strength. Such is not the case. Ron Artest remains iffy to play tonight as he recovers from his Christmas Day stair-climbing fail. Kobe Bryant's injuries I've frankly lost track of at this point. He, Pau Gasol and Lamar Odom all logged at least 50 minutes of court time in Sacramento on Sunday and could have draggy legs as a result. That's the bad news.

The good news is, the Suns give no indication of being at all competitive with the Lakers, and the Warriors blow. A Two-Love set, and further recuperation from the Cleveland fiasco, are reasonable objectives. A loss in either game, however, will chip away a little bit more at the Lakers' championship bona fides.

Catching Up With the Suns

For the first month-and-a-half of the season, Phoenix was invincible at home. Then the Cavaliers arrived on December 21st and made the Suns vincible. The Cavs blew Phoenix out by 18 - Laker fans can empathize - and the Oklahoma City Thunder followed that up by stealing a win on the 23rd. US Airways Center isn't quite the impregnable redoubt it once seemed.

This will be the first time the Lake Show has played in Phoenix, the first two meetings having gone down at Staples. The Lakers prevailed on November 12th by 19 points and on December 6th by 20. Neither contest was close. The Suns seem to bring out the best in the snarling Laker D, which held the NBA's best offense to less than a point per possession in both games. Kobe has scored with ease, and the Laker bigs have operated comfortably against their defensively impaired Phoenix counterparts.

Since the Suns last visited LA, their already shaky D has actually become worse. Coming into the December 6th game at Staples, Phoenix had a defensive rating of 106.9, which ranked 23rd in the league. That figure is now 110.8, down to 27th. The Suns don't force turnovers, they don't control the defensive glass, and they allow opponents to make almost 37% of their threes. It's pretty amazing they're 19-12 with a defense this skanky. 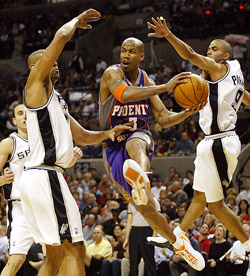 The Lakers, as regular SS&R readers know, haven't been world-rocking studs on offense this year. Their per-possession scoring numbers are still just middle of the pack thanks to some gruesome outside shooting and the deepening mystery of Andrew Bynum. Phoenix presents a nice, soft target to help remedy things.

The Suns can do a bit of scoring themselves, of course. They remain the NBA's best in offensive rating and, except for the one-off collapse against Cleveland, regularly post PPPs better than 1.10. Steve Nash, with his 65% True Shooting, is phenomenal, Amare Stoudamire seems to be rounding into something like All-Star form, and Leandro Barbosa has returned after missing 12 games to give the bench an extra kick. Many of those jumpers that bounced off the Staples rims will fall for the Suns in their own crib.

It would be nice to have Artest around to help slow this attack. Even without him, though, the Lakers have more than enough inside beef and outside Kobe to get the win. If the Suns want to maintain any illusion of being more to the Lakers than an in-conference punching bag, they need the win tonight.

Catching Up With the Warriors

Golden State is an outright disaster, a grotesque waste of talent and fan loyalty. They have some decent pieces, but head "coach" Don Nelson appears intent on mismanaging them in every conceivable way. Consider: Anthony Randolph is the best talent on the team, and he plays less than Vladimir Radmanovic. Yes, that Vladimir Radmanovic.

The Dubs' operating ethos is to disguise incompetence with sheer volume. They average more than 101 possessions per game, almost 5% more than the next-most-frenetic team. Don't think that makes them any good at offense, though. Their offensive rating is 105.4, 19th in the NBA. They turn the ball over with eagerness - here's looking at you, Monta Ellis - and they're flabbergastingly bad on the offensive boards. The Warriors rebound only a fifth of their own misses, which is over 10% worse than the team in 29th place.

Golden State has a couple of talented outside shooters in Stephen Curry and Anthon Morrow. Unlike fellow up-tempo practitioners Phoenix and New York, however, they don't take a lot of threes. The offense is mostly Ellis and Corey Maggette going to the rim and working the midrange. It's not terribly difficult to stop. 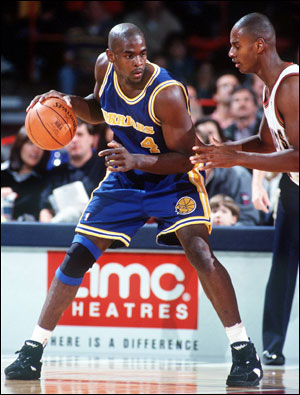 Dubious though its merits may be, the Golden State offense looks fantastic next to its defense. Allowing over 1.10 points per possession, the Warriors' D is down there near the Suns among units that regularly get their faces caved in. They're the worst in the NBA in several key defensive categories, including Effective Field-Goal Percentage, True Shooting Percentage and defensive rebounding. Otherwise they rock.

Honestly, the Dubs are just a few ticks up from the Timberwolves and Nets in the NBA feudal system. When they faced the Lakers on November 28th, they were at home and still lost to 33. Every Lakers starter reached double figures.

I should also mention that they have to play the Celtics tonight before flying to L.A.

Tuesday embodies the best circumstances the Lakers could hope for on the tail end of a back-to-back: at home against a horrible opponent that played an elite team the night before. Even if half the Lakers stay in Phoenix to golf, this is likely to be a straightforward, check-the-box win. I think we deserve it, don't you?

All statistical terms defined here. Parentheses indicate league rankings. Numbers are courtesy of Basketball Reference and HoopData and, except for record and net points per game, are through Saturday night's action.