Are you a fan of Kobe Bryant? Do you enjoy seeing him score points? Then do not fail to watch the Los Angeles Lakers' game tonight against the Oklahoma City Thunder. It should be a jolly one for him, and for you.

The Thunder, you'll be pleased to hear, have allowed an opposing player to score 30 or more points in five consecutive games. A few of these are forgivable. LeBron? Sure. Carmelo and Dirk? All right, fine. But Rodney Stuckey? Trevor Ariza? When those guys are lighting you up, it might be time to admit that your D's getting a tad spongy.

The Lakers probably aren't the team against whom to despongify oneself.

OKC is trundling through an especially nasty piece of scheduling. Their last five opponents have been Cleveland, Denver, Dallas, Detroit and Houston. After playing the Lake Show tonight, they "get" to play in Phoenix tomorrow. That's seven games in 11 days against opponents with a combined winning percentage of 0.661. Happy holidays!

The only team in that group the Thunder have managed to beat is Detroit. Against the large-bore competition, they've looked like a team not quite ready to graduate from the kids' table. Everyone's in love with the Thunder's young talent, and for good reason, but it hasn't come together yet into a playoff-caliber product. In the NBA's competitive ecosystem, they're still closer to the Clippers and Sacramento than they are to, say, Utah or Portland.

This will be the third time the Lakers have faced Oklahoma City this season. In the first meeting, in OKC on November 3rd, the Lake Show prevailed in overtime, 101-98. They were still without Pau Gasol at the time and needed big numbers from Kobe and Ron Artest to leave town with a W. The rematch on November 22nd at Staples was less theatrical, with the Lakers winning by 16. Kobe took apart the Thunder D for 27 points, seven assists and zero turnovers. 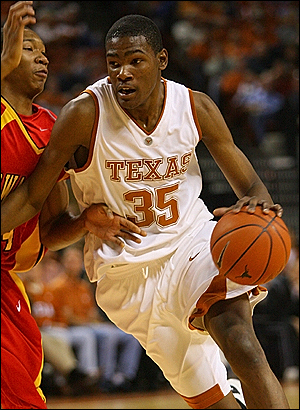 For the season the Thunder haven't been terrible defensively. They're ranked seventh in defensive efficiency and do a fine job of forcing turnovers. Lately, however, they've really struggled to control opponents' outside games. Over the last five contests opponents have made a sizzling 41% of their threes. The Lakers have been brutalizing rims with their three-point brickage, so tonight's a good opportunity to get back on target before the Cavs come to town.

On offense the Thunder are definitively subpar. The ball is dominated by Russell Westbrook and Kevin Durant, two talented but erratic players. They're both capable of inflicting damage, but they're also good for plenty of 7-for-19 box score lines. Westy and Durant have All-Star Games in their future; today they're still works in progress. Against a Lakers defense that's the NBA's best, they'll need to be at their sharpest for any sort of upset bid to develop.

OKC's best player of late has actually been power forward Jeff Green. It's not like he's going to blow up and go for 35 and 20, but he's had a nice run of really solid performances. The other two starters, shooting guard Thabo Sefolosha and center Nenad Krstic, are possessed of very narrow skill sets. 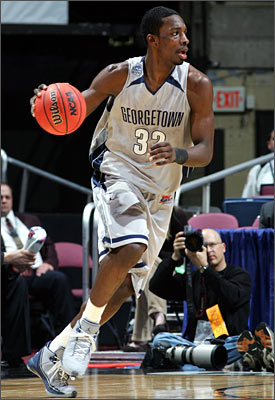 A couple bench dudes to keep an eye on are James Harden and big man Serge Ibaka. Harden you probably know about, as he's a local guy with a Pac-10 and high-lottery pedigree. He's had back-to-back solid games. Ibaka's a superathletic 20-year-old who's probably better than Krstic, the guy who starts ahead of him. I wonder if that ever gets awkward.

For the Lakers, tonight's game is all about showing up ready to work. This isn't a challenging matchup in any sense. They just need to make sure their minds aren't wandering ahead to Christmas with LeBron.

NBA lore will tell you that the first game back from a road trip can be tough. The idea, I guess, is that enjoying the comforts of home can cause you to lose your edge. Whatever you say, old-ass NBA commentators. Not sure I buy it, but if it helps you get interested in tonight's game, don't let me stop you.

What's best about tonight, I've saved for very last. I can't tell you how happy I am to type the following words:

Hell. YES. Our hostage crisis at the hands of Hot Rod Hundley is finally over. Just the thought of hearing Stu's voice tonight brings tears to my eyes. He's not allowed to take time off ever again.

All statistical terms defined here. Parentheses indicate league rankings. Numbers are courtesy of Basketball Reference and HoopData and, except for record and net points per game, are through Sunday night's action.