Artest Is Fitting in Quite Well, and Other Good News

Share All sharing options for: Artest Is Fitting in Quite Well, and Other Good News

Last October, as part of our preview series, I published a piece here titled Stat Trends to Watch in the New Season. In it I broke down five statistical issues I thought would be especially telling as the Lakers' title defense got underway. The season has reached and passed the quarter pole, and with a short break in the action - the Lakers are off until tomorrow night - now's a good time to revisit those five issues to see how things are shaping up.

As I discussed in the original piece, Ron Artest's signing with the Lakers raised an interesting question of fit. Throughout his career, Ron has generally been a high-volume shooter of middling efficiency. His offensive skill set was useful on a Houston Rockets team staffed with role players who couldn't really create shots for themselves, but on a Lakers team bristling with scorers, something had to give. The best-case scenario would be that he segues gracefully into the Trevor Ariza role, that of an efficient but secondary offensive option. The worst-case scenario would be him draining possessions from Kobe Bryant, Pau Gasol and others, burning those possessions inefficiently and thus dragging down the Laker attack.

So far, the Artest Experiment is going just fine. Ron has gone out of his way to defer to the Lakers' other shooting options - his usage rate (the percentage of the team's possessions he uses while he's on the floor) is down to 18% from 23% last year - and his True Shooting Percentage is up a few ticks. I expect his TS% to increase further, in fact, as Ron's shooting only 62% from the free-throw line. That's well below his career average of 72% and is likely just a fluke. As his free-throw accuracy regresses to the mean, he'll become an even more efficient scorer.

Another good indicator of Artest's fit in the Laker offense is his assist rate. This measures the percentage of a player's possessions that ends in an assist. Ron's assist rate so far this season is over 21%, which is far and away his career high. The stats here confirm what our eyes have been telling us - that Ron is an exceptionally skilled passer who's made feeding his teammates a priority.

There are two areas of improvement I'd like to see in Ron's numbers. First, turnovers. I want fewer of them. Right now he's turning the ball over on about 12% of his possessions, which isn't good for a small forward. That's higher than his career norms, so he should be able to bring that down.

Second, Ron doesn't seem to be all that good at finishing at the rim. He gets to the rum perfectly fine, nearly five times per 40 minutes, but he converts only about 50% of those looks. Just to pick a couple comps not quite at random, Kobe's conversion rate at the rim is generally 60% or above, as is Ariza's. Ron doesn't have the ups those guys do, and he also appears to hurry his shot when he gets a close look. Take it from Dr. Dre, Ron: slower is better.

Last year the Lakers pulled off an unusual trick: they had a very good defense despite allowing opponents to hoist a bunch of threes. Those two things don't typically go together. You defend the perimeter, stathead orthodoxy will tell you, by chasing shooters off the three-point line. There's a lot of evidence that teams don't have much control over opponents' three-point accuracy, so the key is to limit their three-point attempts. Make them take long twos instead. That's not what the Lakers did last season, but they got away with it because their opponents made only 34% of their threes, the third-lowest rate in the league.

Was this just good fortune, or are the Lakers really onto something? The numbers so far suggest the latter. The Laker defense has really tightened up the number of three-point attempts it allows: only 21% of total FGAs, eighth-best in the league. And of the threes that go up, less than 30% go in, easily the best in the league. It looks like the Lakers actually do know how to shut down the long-distance game.

The Lakers are blessed with long and athletic perimeter defenders, which obviously helps, but the strong-side trap they installed at the beginning of last season is proving to be a robust system. We should also note that they've maintained and even improved on last year's stingy D despite the loss of Kurt Rambis, the team's de facto "defensive coordinator." Hats off to Phil and his assistants for not missing a beat. 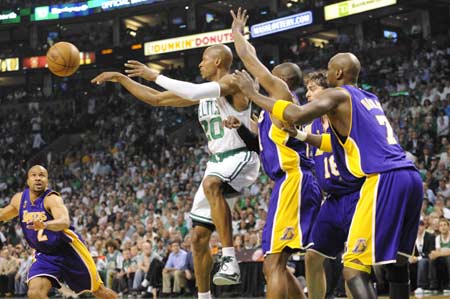 Opponents of the 2008-09 Lakers made 75.3% of their free-throw attempts. Only opponents of the Rockets shot worse, meaning the Lakers got fairly lucky. It's not the hugest deal ever - their good luck was worth something like 35 points over the course of the season - but it's enough to swing a game here and there. So how's the free-throw "defense" holding up so far in the new campaign?

In absolute terms, it's been almost exactly identical: opponents are hitting 75.4% of their freebies. The league average is down a couple percentage points this season, however, so you can't really say the Lakers are still coasting on luck. What they've "allowed" is right at the league mean.

It still becomes relevant on a micro level from time to time. Kobe's epic buzzer-beater against Miami, you might recall, was made possible only because the Heat, a 75% free-throw shooting team on average, shot 64% from the line that night. Had they made free throws at their normal rate, they would've scored five additional points, swinging the outcome in their favor. 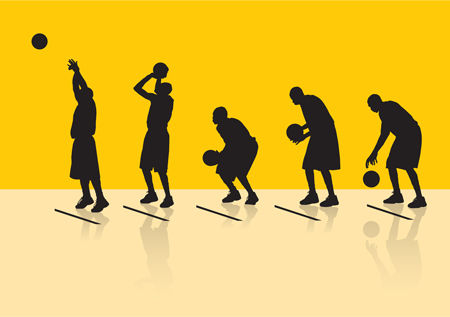 In October I observed, to everyone's delight, that Kobe's tendency to draw fouls and get to the free-throw line had declined sharply from the previous season. His ratio of free-throws attempted to field-goals attempted, a basic measure of a player's ability to get to the line that I'll refer to as "Free Throw Rate" for brevity's sake, had dropped 25% from 2007-08. Here, to remind us all what we're talking about, are his recent Free Throw Rates by season and age.

The fall-off is problematic for a couple reasons. One, the free-throw line is among the most efficient ways to score points. Two, a declining Free Throw Rate can be an early warning sign of aging. It can indicate that a player is losing a step and can't beat opposing defenders like he used to. I didn't argue that Kobe had, in fact, lost a step - just that this is something to keep an eye on as his odometer keeps spinning upward.

His Free Throw Rate looking so far this year? Steady as she goes - 0.32, almost the same as last season. That's good news, as are the other readings we often look to as a way of measuring athleticism. Kobe's steals and offensive rebounds are both up significantly, and the advanced metrics that try to capture individual D say that he's defending as well as ever. To the naked eye, he looks even stronger than he did last year (his recent injury and illness aside).

Everything checks out fine, in other words. Admittedly, though, I don't know why Kobe's Free Throw Rate is hovering below his career levels. I recently examined Free Throw Rates of 20 or so elite scoring wings from the last three decades and found that most of them didn't suffer declines in this metric in their early 30's. At this stage of their careers, most held steady or even got better at getting to the stripe.

My working hypothesis with Kobe is that his Free Throw Rate has been affected by the emergence of Andrew Bynum as an offensive force and the arrival of Pau Gasol. These two events happened during the 2008-09 season, which is when the falloff in Kobe's FT attempts kicked in. With a pair of potent offensive options in the lane, Kobe may well have decided that the Laker offense no longer required him to hurl himself into the paint (and subject himself to possible injury) quite so much. To test this I need to take a closer look at game-by-game shot charts from this season and last, but it all seems plausible on its face. 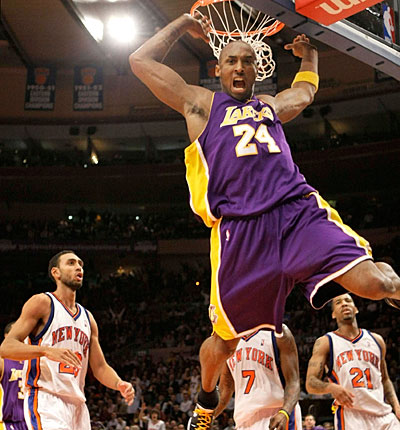 This one I tossed into the October piece as a little pat on DJ's back, since he didn't get much love from our previews otherwise. As it happens, the man has played more this season than we guessed he would, owing to the Bynum and Gasol injuries. And he's held his own! His defensive numbers are strong across the board, and while his block rate (the percentage of the opponent's two-point shots he blocks while he's on the floor) is down from the insane 10.2% of last season, it's nonetheless at a very-respectable 7.2%.

So much respect to DJ, seriously. There are many worse backup centers in the league. For the cut-rate salary of less than a mill, he's quite the good value. 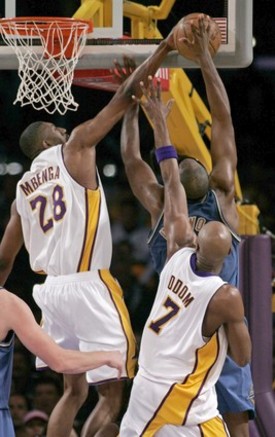