Kobe Should Not Have Played Tonight

Share All sharing options for: Kobe Should Not Have Played Tonight

You know it. I know it. Kobe knows it. Most of all, the Utah Jazz know it.

To say that he shouldn't have played tonight isn't a diss of Kobe. It's really not. It doesn't mean he isn't tough, or that he isn't completely awesome. It just means he has a human body like the rest of us, one vulnerable to harm and illness. With a broken finger and a stomach virus, not only was he not his usual self tonight. He wasn't even at sufficient strength to help the Lakers, who lost to the Utah Jazz by the score of 94-102.

The numbers are bracing: Kobe shot 7 for 24, his worst shooting performance of the season. He didn't have the energy to get to the basket, to get lift on his jumpers, or to keep up on defense. The Lakers have proven that they have enough talent to win games without Pau Gasol and Andrew Bynum. That means they have enough to win a few without Kobe, and both he and Phil Jackson need to realize it. If he needs a week or two off to get better, the franchise will survive.

The game tonight came down to that obscure skill known as making baskets. Those shots that fell for the Lakers at Staples wouldn't stay down. All those bricks the Jazz threw up at Staples found their way to the bottom of the hoop. It's the mystery of home-court advantage in the NBA. You either come to terms with it, or you drive yourself mad.

With the loss the Lakers are 18-4, no longer proud owners of the NBA's best record. To Chicago on Tuesday night we go. Times could get worse, but they're likely to get better.

(P.S. - Can't quite put my finger on why, but the screengrab below encapsulates this game for me perfectly.) 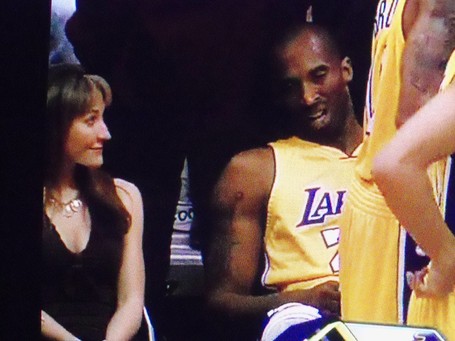