Stat Trends to Watch in the New Season

Share All sharing options for: Stat Trends to Watch in the New Season

Those of you who chilled here during the playoffs last season may recall our regular, wittily named Tempo-Free Boxscore Breakdown feature. The objective of TFBB was to bring you quantitative analysis of the Lakers using next-gen stat methods, although that makes what we did sound more posh and wonky than it really was. All we were up to was looking at Laker game stats from different viewing angles than are customary in the MSM world. For instance, we framed the Lakers' offensive and defensive numbers on a per-possession basis, rather than per game. Or, say, we evaluated rebounding performance not in terms of "rebounding margin," as you're probably used to seeing, but as offensive and defensive rebounding percentages - asking, essentially, what portion of the available boards on each end of the floor did the Lakers pull in?

We didn't invent this stuff but we think it's quite useful, and it's going to be a key part of our coverage in the season to come. If numbers aren't your thing, no worries... there will be plenty of other, non-statty material here at SS&R to keep you delighted and informed. If, however, you're interested in what the most advanced statistical tools can tell us about the Lakers, you'll want to stop by even more than you already do. Nowhere will you find better analytical coverage of the mighty Lakes.

To get this portion of the program rolling, I've picked out five statistical issues of particular import. They're all trend lines to keep an eye on as the season gets underway, as they'll help to determine exactly how monstrous this version of the Lakers will eventually become. So everybody to the dance floor, after the jump! This action is guaranteed to put your ass in traction...

Imagine you're tucking in to a delicious steak dinner. Before you sits a perfectly marbled ribeye, baked potato, steamed asparagus and a glass of 1994 cabernet. Everything you need is there and in harmony. Almost everything, that is: what would make this meal truly righteous, you decide, is some hollandaise sauce. Mmmm... hollandaise. You ask the waiter to hook you up, and you sip your wine expectantly as you await this culinary coup de grace.

Except, when the waiter comes back, he puts on your plate not a dollop of hollandaise, but instead - oh I don't know - a whole roasted duck. It's not what you ordered, and it's not what you want. This might be the best roast duck in the world, the Platonic ideal of roast duck, an exquisitely spiced and cooked bird to make the finest Cantonese chef in all of Guangdong weep, but it's not what you need. It upsets the balance of the meal, and it complements nothing else on the plate. It's all just too much.

This, basically, is the stathead critique of the Lakers' de facto trade of Trevor Ariza for Ron Artest. In Ariza, the Lakers had a low-usage, high-efficiency player - that is, someone who didn't soak up a lot of offensive possessions but was efficient when he did shoot the ball. This is a useful type of player on a team, like the Lakers, with plenty of guys who can create their own shot and occupy the defense. In Artest, the argument goes, the Lakers get the opposite: another guy who can find his shot but who uses a lot of possesions, and not very efficiently. A volume scorer, in other words, added to a team with several of them already.

Ariza was the complementary sauce that perfected the meal. Artest is the roast duck, an entree too many. What Phil Jackson now needs to figure out is how to take that entree and turn it into a splendid side dish. (OK, metaphor integrity is starting to falter here... let's just talk basketball.)

When he was on the floor last year, Ariza used 17% of the Lakers' possessions. Artest has used between 23% and 26% of his teams' possessions in each of the last six seasons. When he's on the floor with some combination of Kobe Bryant (a 32% usage rate in 2009), Pau Gasol (a 20% usage rate in 2009 that everyone agrees should have been higher), Lamar Odom (18%) and Andrew Bynum (21%), Artest will need either to accept a smaller role in the offense or take shots away from others. The latter just won't work on this team. The former will force Ron to play differently than he's done almost his entire career.

That's the bad news. The good news is, there's a well-established, inverse relationship between usage rates and offensive efficiency. As players are forced to create their own shots, how well they convert those looks declines, but the more players are allowed to pick their spots, the more efficient their shooting gets. So if Ron can adjust to life as a role player in the Lakers offense, it's likely that his shooting will improve.

And rest assured, there's room for improvement. Last year Ron made only 40% of his two-point attempts, a terrible number, and went to the free-throw line at the worst rate of his career. His True Shooting Percentage, a metric that captures how efficiently a player uses his shot attempts (taking into account three-pointers and trips to the free-throw line), didn't totally fall off the cliff, settling at a not-disastrous 51% thanks to 40% shooting on threes. In the two prior seasons, however, Ron posted True Shooting Percentages of 54%, and he should be able to recover to that level if he accepts becoming a tertiary offensive option.

The addition of Artest definitely stresses the architecture of the Laker offense. How successfully that stress is relieved will be a major storyline this year, and may take the entire season to resolve itself. 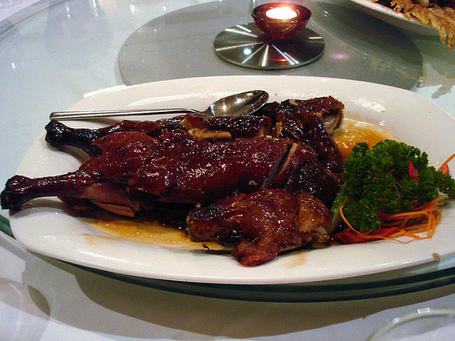 Allowing one's opponents to launch a bunch of three-pointers is not generally a great idea. The three is one of the two most efficient ways to score in basketball - the other is the free throw line - so if your opponent is getting a ton of looks from distance, there's a risk you're going to get bombed out of the game. It's better if you force the opposing offense to take long or challenged two-point attempts instead.

Last year, the Lakers got away with the opposite approach. One in four FGAs by Laker opponents were from three land, which placed them 27th in the league in that category. It worked, though, because for the most part, those three balls didn't go in. Opponents made only 34% of them, good for the league's third-lowest accuracy rate. This season I'll be curious to find out how robust these trends are and to what extent they're a function of the Lakers' defensive system.

In 2008-09, the Lakers deployed a revamped defense that sought to trap the ball on the strong side and funnel it toward their long-armed interior players. For the most part, the change was successful: the Lakers lowered their Defensive Rating (the number of points allowed per 100 possessions) from 107.7 in 2008 to 106.2 in 2009, largely by forcing more turnovers. But were the extra turnovers truly costless? Or did the Lakers get lucky last year, in that opponents simply failed to knock down many of the open looks that the strong-side trap made available?

The correct answer, boringly enough, likely lies somewhere in between.

Speaking of getting lucky, last year Laker opponents made 75.3% of their free-throw attempts. Only opponents of Houston shot worse from the line. I know this might rock your brainpiece, but defending free-throw attempts isn't really a skill. That's why the adjective free is used to describe them.

The league as a whole made 77.1% of its FTAs last year, and if Laker opponents had been in line with that average, the Lakers' D would have surrendered an additional 35 points, or 0.42 points per game. That's not a huge number but could swing a game at some point. Even worse, if the Lakers get especially unlucky - like Portland, whose opponents made over 80% of their FTAs last season - you could be talking about more than a point per game, which is certainly enough to change a win to a loss.

Just something to keep in mind if, as seems very likely and as happened last year, the race for home-court advantage in the playoffs comes down to a single game one way or the other.

In 2008-09, Kobe made it to the free throw line with much less frequency than he had in years prior. Here are his ratios of FTAs to FGAs for each of the past six seasons:

That last number is a career low for him, and I'm very interested to find out if it was a flukey outlier year or an advance warning of something else. The lower free throw rate wasn't a problem in and of itself - he obviously had a great year in spite of it, and the advanced individual metrics tend to agree that on the whole, he was the Same Old Kobe - but it could be a leading indicator of his coming decline phase.

One thing that happens to wing players is that as they get older, they drive to the basket less than they did in their spry 20s. That's partly motivated by physical preservation: injuries are more difficult to recover from as one gets older, so it makes sense to avoid getting pounded. But it's also motivated by necessity. Older players don't go to the whole as much because they can't do it. They can't take fools off the dribble as they once did.

I'm not arguing that this is what's happening to Kobe, but I am throwing it out as a possibility. It's also a possibility that this is happening, and that Kobe will nonetheless adjust his game, as Michael Jordan famously did, to remain a potent offensive force in his later years. News reports this summer about Kobe working on his post game suggest that he knows what's coming and is determined to stay ahead of the curve. 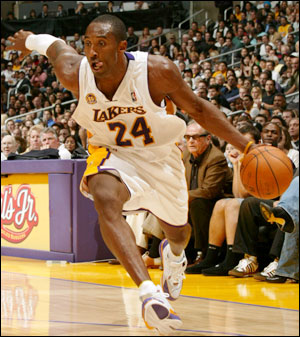 All right, this one isn't really that important, big picture-wise. It's just, we've been pretty neglectful of DJ in our season preview pieces so far, and he's definitely due for some respect. Come on... who doesn't love DJ Mbenga!

The thing is, his block rate actually is outstanding. Last year when he was in the game, he blocked almost 7% of opponents' field goal attempts. That's a better rate than was posted by Dwight Howard or Chris Andersen, to toss out just a few notable examples. In the preseason this year, DJ swatted 12 shots in six games.

With both Pau and Bynum nursing owies, it's possible that we'll see more Mbenga Time than we expect. DJ plays offense about as well as I speak Congolese (not actually a language, it turns out), but he's better than fine defensively.

So DJ, if you're reading this, we here at SS&R love you just the way you are. Keep doing what you're doing. 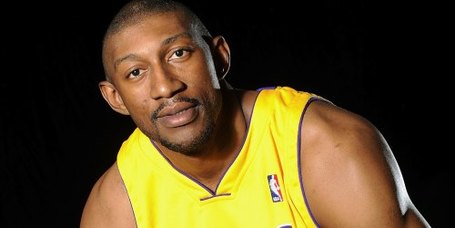 I should mention, the source for many of the above numbers is the awesome Basketball Prospectus, the website run by Kevin Pelton and Bradford Doolittle. Kevin and Bradford do a lot of incredibly valuable work in basketball analytics, and if this topic interests you in the least I encourage you to purchase their season-preview book, available here. It's both a great read and a trove of insightful data. I've been devouring the book in an attempt to get ready for the season, and I recommend it to you all without reservation.