There's something you need to prepare yourself for. We all need to prepare for it. Fans, players, rich and powerful bloggers... all of us connected with the Los Angeles Lakers are going to see our view of the world soon rearranged in a way that no one has really started talking about.

It mightn't be easy for people to accept. To be honest, it's likely to be a bit awkward and emotional. But it's going to happen, and I'm here to assure you that it's not necessarily a bad thing.

Sometime soon - within the next three seasons, I'm willing to bet - Kobe Bryant will no longer be the best player on the Lakers. That accolade will instead belong to Senor Pau Gasol.

When you think about it, this really isn't such a big-... *dodges rocks thrown at head*... hey, knock it off! There's no need to get viol-... *takes cinderblock to face*... gah, those edges are sharp! *runs and hides behind couch like little baby*

What I'm talking about here is age. The great march of time that ravages us all. As Chris pointed out in his preview of the shooting-guard position, Kobe is now 31. Although his decline phase hasn't really kicked in yet and will likely be a gentle downward glide path when it does, it will indeed commence sooner than any of us would like. It happens to everyone, right? Take me, for example. I, too, am in my 30s, and I realize that sometime in the near future I'll simply be too old to attend high school proms. Which is fine, it really is! We should all endeavor to age gracefully, even at the cost of one's social life. 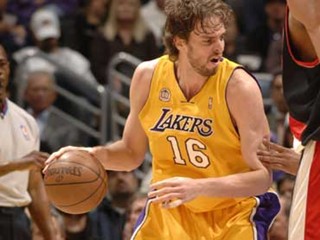 Pau is two years younger than Kobe and entirely capable of making up for any slippage in the latter's game. Already established as one of the league's top power forwards before the 2008-09 season began, he put together a dazzling campaign that solidified his standing as a true megatalent. If his numbers have never quite reached the heights of a Kevin Garnett or Dirk Nowitzki, he's nonetheless a better fit for the Lakers' system than would be anyone else from the power-forward pantheon.

What became clear as last year wore on is that the Triangle works best, and is at times unstoppable, when it operates Pau-centrically. His height, vision and passing touch can dice up even the best defenses, as we saw in the Finals against Orlando. He has McHale/Duncan-caliber post moves and a gentle, accurate shooting touch out to the free-throw line. Every Laker should have a GET THE BALL TO PAU screensaver installed on his laptop.

Defensively, Gasol has the length and quick-twitch agility to harass opposing big men of all varieties. If Andrew Bynum is healthy - please pause to perform a superstitious ritual of your choosing - Pau won't have to guard opposing centers nearly so much as he has done, but he's proven that he can handle the work if necessary. (See: Howard, Dwight.) He can also handle "Stretch Fours" a la Sheed and Dirk, although the Lakers' defensive structure keeps him pretty close to the paint most of the time.

At 29 years old, Pau isn't likely to get significantly better than he already is, so it's not reasonable to think that there's, say, an MVP award in his future. What he is, though, is awfully damn good. He'd be the best player on about 20 teams, and he should still be performing at this level in a couple years, when Kobe will begin the transition to second-banana status. (Pau's contract expires in the summer of 2011, but I can't imagine Jerry Buss not extending him.)

Hey, I know it'll be weird - publicly and spiritually, the Lakers will be Kobe's team for as long as he's around - but there's no shame in ceding the limelight to a big man this magnificently talented. The transition will be subtle and possibly unacknowledged, but rest assured we'll remain in good hands. 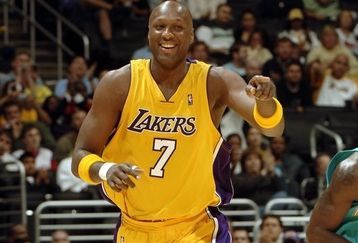 Hey, anyone know what Lamar's been up to this offseason? I don't think I've seen him in the news even once... guess he's been keeping to himself. Anyhow, he's back with the Lakers on a new contract after a smooth and uneventful negotiation with the team.

Every person reading this - all 12 million of you - has at one point felt massively frustrated with Lamar's play. You know what, though? He really does kick ass at basketball. With a wildly athletic 6'10" frame, he can function at a high level anywhere on the court, and like Gasol his multiplicity of talents suggest that he was genetically engineered to play in the Triangle. He can either catalyze the second-unit offense or, as he did in Cleveland last year, morph werewolf-style into a low-post scoring and rebounding menace.

If you are an opponent of the Lakers, there is simply no hiding from Lamar Odom.

Admittedly, I'm not crazy about his three-point shooting. He's hit 31% from range on his career, and you should definitely not expect anything like the insane 51% he hit in the playoffs last year. He'd be a more efficient offensive player if his shot selection were heavier on two-point attempts. But this is quibbling. Odom is a terrific player, and that the Lakers bring him off the bench as their sixth man is kind of obscene. 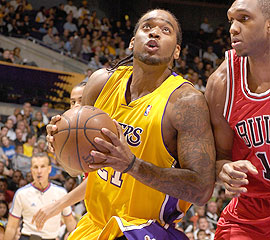 Any PF playing time not claimed by Gasol or Odom will fall to Old Man Powell. (He's actually only 26, but "Old Man Powell" has a fun ring to it, in a Scooby-Doo Villain kind of way.) Powell isn't that good, but he's cheap and doesn't steal yogurt out of the company fridge. Also he makes money for playing sports, which compared to yours truly makes him History's Greatest Human.

Look, all you really need to know is, if Powell plays more than 10 minutes a game this year, it means there's either been a horrible run of injuries to the Laker frontcourt, or Lamar's wife mistook him for a baked ham and ate him in his sleep.

Hardly anyone has the talent to hang with the Lakers at the power-forward pozishe. The Mavs' Nowitzki-Shawn Marion combo is pretty tasty, and Garnett and Sheed (if healthy and motivated, as applicable) would make Boston a formidable Finals opponent. But Gasol and Odom are elite performers at the height of their careers, operating in a system that exploits their skills to near-perfection. There's no reason to think they won't treat us to another season or three of championship-caliber work.

In other words: all systems go.

(Can I come out from behind the couch now?)