From the weakest position on the team to (arguably) the strongest position, we now turn our attention to the shooting guards for your Los Angeles Lakers.  And when you have one of the greatest ever to lace em up on your team, his backup doesn’t really even matter in the equation of team strength.  The shooting guard position is the complete opposite of the point guard position in many respects.  Unlike with the point guards, both of our shooting guards will not be going anywhere after this season.  Kobe will be a Laker for life, and Sasha’s contract is pretty untradeable unless his play turns around dramatically, in which case the Lakers wouldn’t want to trade him.  So there are no dynamics other than winning which will have an effect on the events at this position on the court.  Nobody in a contract year, and no battle for minutes, unless the coaching staff decides to get creative with their rotations.  Kobe will play a lot, and Sasha will play the rest of the time.  Case closed.

Of course, that won’t prevent us from digging deep to provide you with some personal storylines for the Lakers’ two guards and expectations you should have regarding their play. 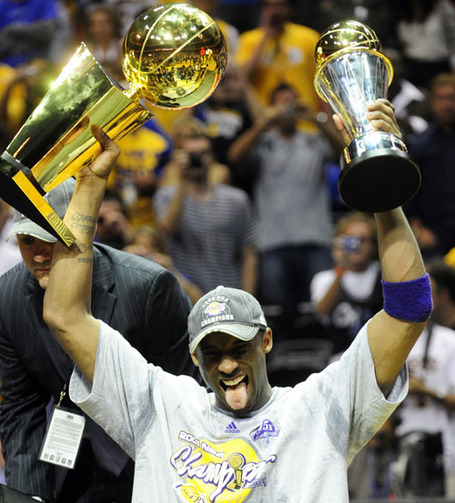 It’s good to be Kobe Bryant right now.  He’s just won his 4th championship, a title that came with his first Finals MVP.  He won a ring without Shaq, and erased virtually all of the criticism that had come his way since the two parted ways 5 years ago.  He’s the most popular player in the world, with the best worldwide jersey sales.  He spent his summer traveling the globe (mostly the far east) promoting basketball and being adored by throngs of fans.  He’s on a team with as much talent as he’s ever had, and he’s the undisputed leader of that team.  Even the most ardent of rational Kobe haters will agree that he is already a top 20 all-time player, and isn’t done cementing his legacy yet.  He hasn’t fully returned to the endorsement glory he saw before Vail, Colorado, but he’s getting there fast.

So what does the man who has it all do with his offseason?  How does the man who is already one of the most skilled players to ever play this game spend his time between June and October?  Why, he tracks down one of the other greatest players of all time, and attempts to steal all of his moves, of course.

I guess Kobe wouldn’t have reached the level of success he’s had if he didn’t have such a tremendous work ethic so it shouldn’t be much of a surprise that Kobe’s response to finally attaining the ultimate goal he’s had for five years would be to strive to continue to get better.  That’s what all-time greats do.  They never rest on their laurels.  They are always seeking to be the best, and being the best means developing unused parts of your game.  So Kobe, who has clearly seen what a consistent fade away can do for a player of his caliber in the later years (see Jordan, Michael circa 96-98) tracked down the player with the most beautiful fade away in the history of the game, one Hakeem "The Dream" Olajuwon.  He practiced with The Dream, and that practice session was enough for the man himself to proclaim "Watch out for Kobe this season."

Aside from all that, there is one major change between Kobe Bryant of last year and Kobe Bryant of this year.  Joy.  Not only is it good to be Kobe Bryant right now, Kobe Bryant knows how good it is to be Kobe Bryant, and you can tell he enjoys the hell out of it.  During last year’s playoffs, Kobe turned down right scary.  Not necessarily in the way he played, or even in the way he talked to teammates and opponents.  But his desire was so strong that you could almost see it tearing at the seems of his very being.  It was so evident that it became cliché to talk about "how badly Kobe wants it" and yet no one could stop talking about it anyways.  Kobe has always had a way of doing amazing things without seeming to enjoy them, but he took that to another level in the playoffs last year.

I’m certainly not saying that Kobe has lost any of the hunger that has driven him throughout his career.  If he had, that whole Hakeem storyline wouldn’t exist.  What I am saying is that Kobe’s obsession won’t manifest itself in such manic form this year.  You’ll see a happier Kobe, one who has a greater ability to enjoy the ride while he’s on it, instead of after it’s over.

Regarding his actual play, the only question mark regarding Kobe Bryant is whether he will begin to decline as a player.  It seems unlikely for a variety of reasons.  He’s not exactly old (31 years old this year).  No one, and I do mean no one, in the NBA prepares himself for the grind of the NBA better than Kobe.  His work ethic is legendary, even amongst today’s legends.  He is not injury prone (or at least, he’s not prone to missing games due to injury).  And he’s certainly shown no signs of slowing down up to this point.  But it must be said, the man has played a lot of basketball in his lifetime.  He’s been in the league as long as Derek Fisher, who is clearly starting to decline physically.  He’s only missed the playoffs once in his entire career, so he’s been playing, on average, 90 games a season for the last 13 years, and that doesn’t even include his time spent with Team USA.  If you think that games played is a more clear indicator of a player’s shelf life in the league, then Kobe could be closing in on the point where he starts to deteriorate.

Personally, I don’t think it happens this year.  Kobe will be as strong as ever. 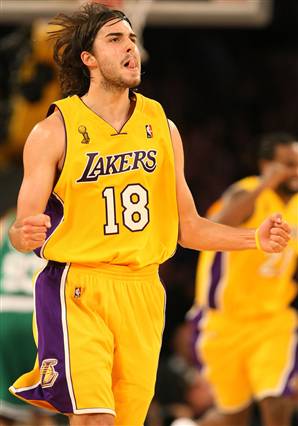 The man, the myth, the Machine.  Or at least, he was two years ago.  Last year, like Farmar, he took a huge step back.  The machine was broken, for pretty much the entire season.  However, unlike Farmar, he had absolutely no excuse.  His problem was entirely mental.  It was disheartening to watch, but not entirely unfamiliar.  Basically, he reverted back to the Sasha that Laker fans had known for the many years before his breakout season.  And when it comes to Sasha, that’s the only question that matters.  Will we get Sasha Vujacic, the practice player, who is lights out in shoot-around, but rushes shots and gets needless fouls?  Or will we get The Machine, who is capable of scoring as many points as he plays minutes, and plays decent, annoying defense that allows him to get under players’ skins?

That question is the single, most important, question to answer regarding the Lakers bench dynamic.  Sasha is not the best player on our bench.  That would be Lamar Odom, beyond a shadow of a doubt.  But Sasha may be the bench’s most important player.  Another year of bad Sasha, and the bench’s struggles may continue.  The Bench Mob’s effectiveness two years ago was due to many factors, but Vujacic’s ability to hit contested jump shots was one of the biggest.  The Machine was capable of turning small leads into big ones, and he could do it in a hurry.  Sasha Vujacic is capable of turning big leads into deficits, by rushing jump shots and getting the other team in the penalty with cheap, unnecessary fouls. So, which one are we going to get?

It’s still tough to say, but early signs are good.  Sasha has shot the ball well in the preseason, and he’s looked pretty darned Machine like.  He hasn’t looked rushed, even when he’s shooting quickly because of the defense.  And he’s been able to defend without fouling.  I know exactly how much stock should be taken from preseason games, but if this carries over into the regular season, we might have Bench Mob 2.0 this season.  Combined with a starting lineup that was able to win a championship despite their bench last season, that’s a pretty powerful force.  It’s easy to forget, due to his poor play last season, but Sasha was getting major minutes two years ago, crunch time minutes.  He was in the game at the end of the 4th quarter in the NBA finals.  And he deserved it.  He was a very decent role player, and if he can return to that quality of play, he provides more off the bench than either of the other guards, thereby making him 7th on the depth chart.

On a personal level, Sasha doesn’t have anything specific to play for.  It’s not a contract year.  He’s not auditioning to be traded.  He’s a Laker this year and he’ll be a Laker next year.  And you might think that Sasha’s play last season falls into the classic pattern of an NBA player who played well for one season to earn a contract, and then went back to his old ways.  You could think it, but you’d be dead wrong.  Sasha did not slack off last year.  He didn’t lack focus.  Sasha is one of the hardest working players on this team.  He’s not on Kobe’s level, because no one is.  But, by all accounts, Sasha is a gym rat who is constantly trying to improve his game.  And for all his faults, there can be no doubt that he cares very much about winning.  In fact, I think that the Lakers loss in the NBA finals two seasons ago weighed so heavily on his mind that it caused him to turn into the head case he was last season.  His level of caring was a fault.  It’s quite possible that being NBA champion will allow Sasha to calm the f--- down, and that could be the difference between Sasha Vujacic and the Machine.  We can only hope. 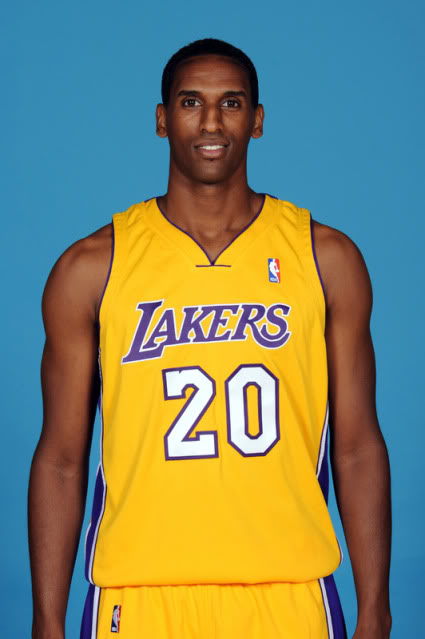 Kelati is a rookie free agent out of Washington State, which is a technical term for a player who didn’t merit being drafted.  He’s on the roster for one reason, and one reason only, because it’s just generally a good practice to go three deep at every position during the preseason.  He doesn't even have an action shot on Google images as a Laker, all I could find was this portrait.  He got a DNP-CD ... in a preseason game.  If he’s on the roster at the start of the season, I’ll eat a piece of paper, and then write him a better profile.  I'll probably also call him directly to apologize, at which point he'll ask if he can crash with me.

The minutes breakdown here is pretty clear.  Kobe will play roughly 36-38 minutes per game, and Sasha will play the rest.  If Vujacic is playing well, the Lakers may find ways to keep him on the court, either cutting into the time of the reserve point guards or the reserve small forwards.  But it seems unlikely that Sasha will get more than 15 mpg max.  This is a deep, deep team, and minutes are hard to come by for all of the reserves.  It will be up to Sasha to play well with whatever minutes the coaching staff gives him, something that hasn’t been a strength of his in the past.  If we see a more mature Vujacic, it’s just another strength in a team full of them.  If he continues to struggle, he’ll see his minutes shrink even further as they get stolen by a two point guard lineup.  Either way, you can count on the Lakers coaching staff playing the players who are performing this year, and there aren’t a whole lot of teams with all the different choices the Lakers have.